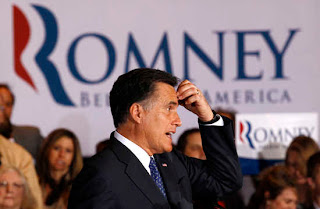 (The Romney) campaign is claiming that Romney’s assertion that his plan would create 12 million jobs is backed by three economic studies — and none of the studies actually says what the campaign says it does. The (implausible) claim that tax cuts would add 7 million jobs was a 10-year estimate, not a 4-year estimate; the 3 million jobs figure for energy was a prediction of what would happen under current policy, not what Romney would add; the 2 million “get tough with China” estimate had nothing to do with what Romney is proposing.

So they’re just faking it — the same way they have with the “six studies” supposedly validating the tax plan, four of which aren’t studies and one of which actually validates the critics.

What’s amazing here is the contempt the campaign is showing for the voters and the media.

Sorry, but Professor Krugman has given you guys a well-deserved "F" for "faking it."
Posted by Bruce Schmiechen at 10/18/2012 No comments: Links to this post 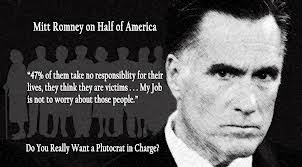 From Mitt Romney, in a June conference call with some fellow plutocrats:


I hope you make it very clear to your employees what you believe is in the best interest of your enterprise and therefore their job and their future in the upcoming elections.


Subtle! Vote for Obama and your job is toast. Stuff like this explains why America's business elites are so beloved these days.

More from Romney @ In These Times:


"Nothing illegal about you talking to your employees about what you believe is best for the business, because I think that will figure into their election decision ..."