The curse of long-term unemployment

Michael Hirsh on "the left-behinds": 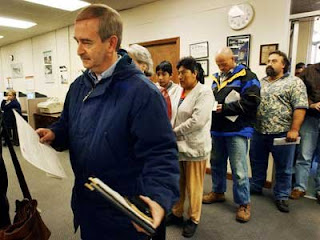 In recent months, Federal Reserve Board Chairman Ben Bernanke and President Obama have sounded increasingly urgent alarms about the staggering number of long-term unemployed. And they are right to do so: 42.4 percent of the nation’s 13.9 million unemployed workers have been out of a job for more than six months.

That’s by far the highest share of long-term unemployed since the government started keeping records a half-century ago. Expert after expert now warns that the longer a person goes jobless, the greater the atrophy in skills and ambition, and the more likely that person is to drop out of the workforce entirely.

What Bernanke and others rarely mention, though, is that this trend has been building for at least three decades. The share of left-behinds has generally ratcheted up with every economic downturn since the early 1980s. And today, even two years after the Great Recession technically ended in June 2009, the number of long-term jobless has continued to climb to record levels. It shot up from 29.3 percent of total unemployed workers in June 2009 and peaked at 44.6 percent as recently as September.

Washington, dominated by a free-market consensus ever since President Reagan’s era, has ignored that 30-year pattern. Partly as a result, reams of data show that America’s middle class has been shrinking.

Among the few who has long second-guessed the Washington mind-set is Frank Levy, an economist at the Massachusetts Institute of Technology who coauthored a much-cited 2007 paper concluding that labor began losing the fight to capital in the late 1970s.

“I’m not sure how much better we could have done in preserving the middle class,” he says. “But I know that, with a few exceptions like the earned income tax credit, we didn’t really try.”

Read Hirsch's complete piece at The National Journal on the roots and growth of long-term unemployment, a curse which has hollowed out the country's middle-class.
Posted by Bruce Schmiechen at 11/23/2011 No comments: