"The federal budget deficit is a distraction" 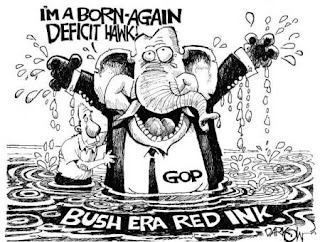 It’s important, yes, and must be addressed. But by a wide margin, it’s not the nation’s most pressing economic problem. That would be the widespread and persistent joblessness that has plagued the labor market since the Great Recession began in 2008.

Almost 14 million people — 9.1 percent of the labor force — were officially counted as unemployed last month. But that’s just the tip of the iceberg. There were almost 9 million part-time workers who wanted, but couldn’t find, full-time jobs; 28 million in jobs they would have quit under normal conditions; and an additional 2.2 million who wanted work but couldn’t find any and dropped out of the labor force.

If the economy could generate jobs at the median wage for even half of these people, national income would grow by more than 10 times the total interest cost of the 2011 deficit (which was less than $40 billion). So anyone who says that reducing the deficit is more urgent than reducing unemployment is saying, in effect, that we should burn hundreds of billions of dollars worth of goods and services in a national bonfire.