Our hero hits the campaign trail 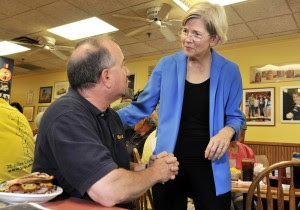 Elizabeth Warren, the brain behind the new consumer protection bureau, is running for Ted Kennedy's old Massachusetts Senate seat, in an effort to oust Republican Scott Brown who was elected on the strength of Tea Party support at the height of the right- wing anti-"Obama health care" hysterics.

Jill Lawrence at The Atlantic reports on Warren's first round of outreach to voters:


Warren is by far the biggest name in the Democratic primary and is already pulling in national money from Democrats determined to oust Brown. By midday Thursday, she was the "busiest recipient" at the ActBlue.com fundraising clearinghouse, with more than $310,000 in contributions. EMILY's List sent out a fundraising email on her behalf headlined "It's on in Massachusetts," asking members to "stop Scott Brown and the Tea Party in their tracks."