Today the government announces April job numbers, but the figures are not likely to be good.  From the Wall Street Journal's "Real Time Economics" blog: 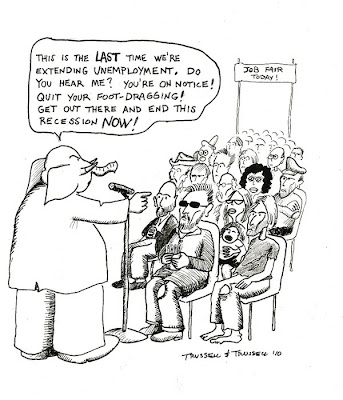 (T)he recent modest job increases prolong the time until payrolls return to where they were before the recession hit.

Indeed, at a monthly increase of 200,000, it would take three years from now until payrolls reached their pre-recession level of 138.0 million...

The U.S. economy grew at a modest 1.8% rate in the first quarter. The April data suggest the second quarter did not kick off with much momentum.

Among the more worrisome yellow lights were the fall in factory production and the steep drop in new orders among non-manufacturers...

Of course, weaker job markets will feed into the headwinds against demand. Consumers cannot boost their spending by an appreciable pace unless their incomes also grow.

Who in Washington believes putting people back to work is the #1 issue facing the country?  Based on the "substance" of current economic debates, it doesn't seem like very many.
Posted by Bruce Schmiechen at 5/05/2011 No comments: Links to this post