Lying Mittster can't help himself.  Lucia Graves at Huffington Post has the latest, wherein his own economic advisors won't back up his dishonest assertions: 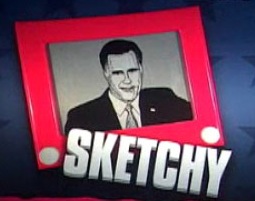 WASHINGTON -- Mitt Romney on the campaign trail has chided President Barack Obama for failing to curb prices at the pump, even as prominent economists have debunked those talking points, saying there's little the president can do to lower prices in the short term. Now the latest twist: No one from Romney's economic team will step forward to defend him.

And not for want of opportunity.

After Romney insisted that more drilling in Mexico and in the Arctic National Wildlife Refuge could bring down the cost of gas, The Huffington Post contacted members of Romney's economic team -- two revolving-door lobbyists and two former chairmen of the Council of Economic Advisers under President George W. Bush -- to ask if they would vouch for the claim.

"I will pass. Sorry," prominent macroeconomist Gregory Mankiw, a Romney advisor, replied when contacted by HuffPost about an interview. Other queries were similarly denied or unreturned.

Consider the argument: "The best thing we can do to get the price of gas to be more moderate and not have to be dependent upon the cartel is: drill in the gulf, drill in the outer continent shelf, drill in ANWR, drill in North Dakota, South Dakota, drill in Oklahoma and Texas," Romney said on "Fox and Friends" on March 16.

Other economists haven't been shy about debunking the claim, explaining that U.S. energy policy has very little effect either on oil prices or on overall U.S. employment. Recent studies have backed them up. The Associated Press' statistical analysis of 36 years of monthly, inflation-adjusted gasoline prices and U.S. domestic oil production found no statistical correlation between gas prices and how much oil comes out of U.S. wells.

"The truth is that we're already having a hydrocarbon boom," Paul Krugman explained in a recent article, "with U.S. oil and gas production rising and U.S. fuel imports dropping. If there were any truth to drill-here-drill-now, this boom should have yielded substantially lower gasoline prices and lots of new jobs. Predictably, however, it has done neither."

Posted by Bruce Schmiechen at 3/25/2012 No comments: Links to this post