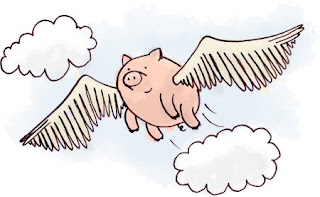 This commentary may seem like pretty nerdy econ-speak, but it's well worth wading through - both for the confirmation that the inflation hawks on the Federal Reserve "aren't even wrong" - in that their preoccupations are nonsense issues in the current economic climate - and the (welcome!) spectacle of neo-conservative "wunderkind" David Frum  (whose hair is on fire at this very moment regarding the descent into near-total idiocy of his GOP confreres) giving apparent blessing to lessons that might be learned from macro-economic policies in the "socialist hell-hole" of Sweden. The post at "FrumForum" is entitled - accurately - Fed Hawks Turn on the Unemployed:


President Narayana Kocherlakota of the Federal Reserve Bank of Minneapolis was one of three Federal Reserve Board members who dissented from their recent decision to keep interest rates low until at least the middle of 2013. He has taken the step of stating why he opposed this more accommodative policy in a public letter. His opinion seems to be that unemployment may be high, but at least it is not as high as it was in 2010 in absolute terms:


while unemployment does remain disturbingly high, it has fallen since November. I can summarize my reasoning as follows. I believe that in November, the Committee judiciously chose a level of accommodation that was well calibrated for the prevailing economic conditions. Since November, inflation has risen and unemployment has fallen. I do not believe that providing more accommodation—easing monetary policy—is the appropriate response to these changes in the economy.

Kocherlakota refers to a falling unemployment rate, but it has not been a steady decline or a steep one.

According to the Bureau of Labor Statistics, the seasonally adjusted unemployment rate was 9.8% in November 2010. It fell to 8.8% in March but then rose back to 9% in April. It is currently at 9.1%.
In an absolute sense, 9.1% is lower than 9.8% but that is hardly an improvement. In addition, some analysts attribute the (slightly) lower unemployment rate to people dropping out of the job market and not actively seeking employment.

Taking Kocherlakota’s statement at face value, it would seem that a decline of 0.7% in the unemployment rate is enough to take a stance against further easing.

To provide a contrast, consider how the Deputy Governor of Sweden’s national bank, Lars E. O. Svensson, regards unemployment. Sweden is notable for having tried some very unconventional monetary easing policies such as negative interest rates. Some believe that these policies have been very successful. According to economist Scott Sumner, Sweden is ”the only western European country expected to achieve rapid growth during 2009-12.”

Svensson gave a speech in March where he discussed what metrics the Swedish bank uses to set policy. Here is why he said that measuring the unemployment gap is a priority for how the Swedish bank sets its policy:


Unemployment is also directly related to welfare – one of the worst things that can happen to a household is that one of the members of the household loses his or her job. Unemployment is also the indicator of resource utilisation that is best known and easiest for the public to understand. The preparatory works for the Sveriges Riksbank Act state that the Riksbank should support the objectives of general economic policy. One of the main objectives of economy policy in Sweden is to limit unemployment, for example by improving the functioning of the labour market and increasing the incentives to look for work.

Which attitude towards unemployment is better? Well the proof might be in the pudding, such as this graph from Svensson’s speech which shows that Sweden is projected to hit its potential GDP much sooner than America:

Email ThisBlogThis!Share to TwitterShare to FacebookShare to Pinterest
Labels: Conservatism in crisis, Jobs