Corporate profits are at a 60 year high - but 40% of small businesses see their earnings declining. Travis Waldron at Think Progress has it:


Even as the economy struggles, corporate profits continue to rise. Wells Fargo, the largest consumer lender in America, announced today that its third-quarter earnings rose 21 percent, to $4.1 billion. Citigroup, the nation’s third-largest bank, also released its earnings statement today, announcing that its third-quarter earnings rose 73 percent over last year, with $3.8 billion in profits. Even though JP Morgan Chase saw its earnings fall from a year ago, it still raked in more than $3 billion in profits. 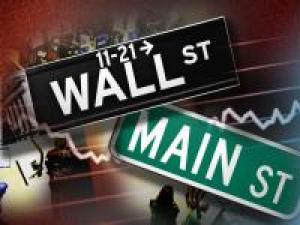 Corporate profits as a share of the nation’s gross domestic product, in fact, are at their highest point since 1950. Recent snapshots, however, tell a much different story on Main Street, where small businesses are limping through an economic recovery that treated corporations much more kindly. According to the National Federation of Independent Businesses’ September report, two out of every five small businesses reported that profits are falling:

A voice from the "1%"...in solidarity with "Occupy Wall Street" 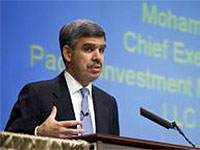 I just saw this via Ezra Klein ("Financiers for Occupying Wall Street"), having missed it last week.  Mohammed el-Erian is co-CEO of PIMCO, one of the world’s largest — and wealthiest — bond trading operations, with more than $1 trillion under management. Surprsingly and to his great credit, el-Erian has written a commentary on the virtues of "Occupy Wall Street," cautioning the media,  the economic elite of which he is a part, and the politicians to take notice, to listen and to collaborate on fundamental reforms: 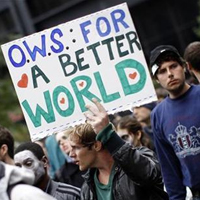 To those wondering whether to pay attention to the "Occupy Wall Street" (OWS) protests, the answer is yes. This is more than just a nascent movement that will grow in the weeks and months ahead. It is part of a worldwide drive for greater social justice.

Like recent examples of peaceful grass-root protests -- from those that delivered the Egyptian and Tunisian revolutions to the massive street demonstrations in Israel -- OWS has taken many by surprise. In just a few weeks, a self-organized group of diverse individuals planted the seed for what is becoming a national movement that exponentially gains energy and visibility…

If you doubt this, go ask the Arab governments overthrown by secular forces that they were slow in understanding and inept in reacting to...

"Inequality not only stinks, but also damages economies"


Living under Communism in China made me a fervent enthusiast of capitalism. I believe that over the last couple of centuries banks have enormously raised living standards in the West by allocating capital to more efficient uses. But anyone who believes in markets should be outraged that banks rig the system so that they enjoy profits in good years and bailouts in bad years.

The banks have gotten away with privatizing profits and socializing risks, and that’s just another form of bank robbery.

“We have a catastrophically bad misregulation of the financial system,” said Amar Bhidé, a finance expert at the Fletcher School of Law and Diplomacy at Tufts University. “Its consequences led to a taint of the entire system of modern enterprise.”

Economists used to believe that we had to hold our noses and put up with high inequality as the price of robust growth. But more recent research suggests the opposite: inequality not only stinks, but also damages economies.

In his important new book, “The Darwin Economy,” Robert H. Frank of Cornell University cites a study showing that among 65 industrial nations, the more unequal ones experience slower growth on average. Likewise, individual countries grow more rapidly in periods when incomes are more equal, and slow down when incomes are skewed.

That’s certainly true of the United States. We enjoyed considerable equality from the 1940s through the 1970s, and growth was strong. Since then inequality has surged, and growth has slowed.