(W)hile the return of all U.S. service men and women by Christmas is a cause for celebration, the costs of the war are only beginning to be fully understood. The “cakewalk” to Baghdad, as George W. Bush adviser Kenneth Adelman infamously wrote in February, 2002, has been anything but. The Iraq War, and the faulty premise that Saddam Hussein was developing weapons of mass destruction, has had a staggering humanitarian and economic cost.

Here are some relevant numbers:

Email ThisBlogThis!Share to TwitterShare to FacebookShare to Pinterest
Labels: Militarism, Ruminations, The Crazy

The US economy is producing close to a trillion dollars less in goods and services annually than it should be producing under "normal" conditions. That is disastrous for employment, the revenue base and economic competitiveness as skills erode and innovation slows.

From the Wall Street Journal: 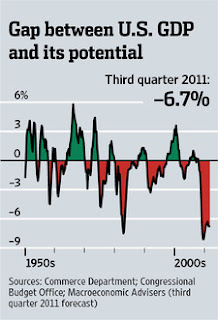 It looks as if, despite everything, gross domestic product picked up in the third quarter, easing fears that the U.S. was on the cusp of another recession. But that doesn’t mean the economy is anywhere near where it needs to be...

Experts quibble about exactly where potential GDP is these days, and that’s especially true in light of all the damage the economy has suffered. Companies have invested less on new plants and equipment, unemployed workers’ skills have eroded, and some people have exited the work force for good — all things that have likely lowered the economy’s potential. But even so, everyone agrees it is still much, much higher than what we’re getting now.