Read this entire excellent review of the recent books by Paul Krugman and Joseph Stiglitz at NYRB - but I'll post the concluding section that unearths, again, the Big Lie that economic elites or "conservatives" actually care about deficits and fiscal responsibility, as opposed to simply eliminating aspects of government that lessen income inequality on ideological grounds and/or for advancing raw self-interest wherever and whenever they can:


Certainly one of the most striking features of current debates is the economic hawkishness of the American upper crust... That powerful CEOs and financial executives could cause so much damage and yet restore their position (and paychecks) so quickly suggests an extraordinary culture of self-justification and demand for deference. Perhaps most telling is the apparently genuine and widespread fury among financial elites at Obama’s occasional, mild criticisms of their excesses. 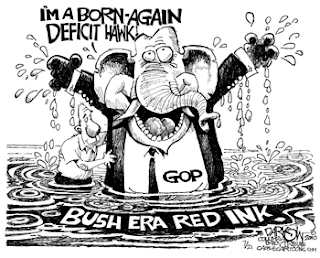 Nowhere are the effects of unequal power clearer than in the shifting commitment of elites to limited government and deficit reduction. When many of today’s loudest deficit hawks had the opportunity a decade ago, they repeatedly chose policies that worsened the deficit in order to lavish benefits on the wealthy and powerful business interests. These benefits ranged from two huge tax cut bills to new subsidies for the oil and gas industry to an unfunded Medicare drug benefit full of handouts for the pharmaceutical industry. They were backed by the economic seers of their era, such as former Fed Chair Alan Greenspan, who insisted, astonishingly, that large-scale tax cuts were justified in 2001 because then-projected surpluses might eventually eliminate the federal debt, forcing the federal government to begin buying up corporate stock. Occasionally the mask slips off entirely. During the last round of intense fighting over the deficit, in the mid-1990s, then House Majority Leader Dick Armey confessed: