Terrible Democratic strategy on the budget... 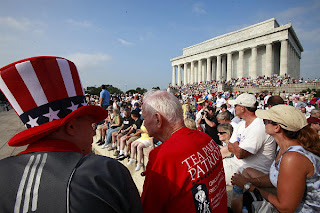 Unfortunately the administration backed away from its budget even before the negotiations started, and the Tea Party is calling the shots in the House. So instead of negotiation between the president’s original level and House leadership’s original level, we’re stuck negotiating between the Tea Party’s $100 billion, and the new status quo’s $50 billion. That means the likely compromise is right where the House Republican leadership always wanted it: around $74 billion.

That’s not much of a compromise if we end up with what the House Republican leadership wanted in the first place.

The full "Think Progress" analysis is HERE.  "The Tea Party is calling the shots in the House" - OMFG! But bending to the crazies seems to be working for the GOP, which is getting it's original offer as the "compromise" with weakened Democrats. This apparent failure is the fruit of the mid-term debacle, of Democratic timidity and - among the base that worked hard for Obama - of our having let the Tea Party activists take center stage at the grass-roots and in the media circus after our guy won the Presidency.      (via Ezra Klein, Wonkbook)

Update: Steve Benen has more on this at Political Animal, HERE.  Up-update: Can GOP over-reach give the Dems leverage?  Brian Beutler, HERE at TPM, has the latest on the potential for a government shutdown.
Posted by Bruce Schmiechen at 3/28/2011