If there's one fact folks need to understand in the current "deficit debate," it's that the GOP doesn't care about the deficits. They care about cutting taxes...primarily for the very wealthy - no matter what the cost or the impact on the country or on responsible government.
That's the bottom line of these alleged "conservatives" of the GOP. Their obsessive clinging to a "policy" of tax-cuts-over-everything became obvious during the GOP temper tantrum over letting the Bush tax cuts expire for the top 1% - the super-wealthy folks whose incomes have grown exponentially over the past thirty years, at a rate about 15 times more than the majority in the lower & middle income groups have seen.
So, if the allegedly "conservative" GOP has devolved into a bunch of shills for cutting taxes on the economic elite and on corporations (or in many cases, simply giving a platform to nut-jobs and demagogues who can't even do the math but are feeding on cultural & racial resentments), what does real "fiscal conservatism" look like?
Well, one might begin with a report just out from the Center on Budget and Policy Priorities. They've got some rational approaches to keeping deficits under control over the long term. They've also got some good charts!  Nothing like a chart to make this stuff (stuff that, frankly - were it not so critical to decent public policy - bores me to tears) comprehensible and easy to grasp without wading through a sea of numbers.
Let's start with the chart above at the top right (Fig2.)  It's pretty obvious.  Bottom line, according to the CBPP report, "letting all the Bush tax cuts expire...is likely to be the only way to stabilize the debt as a share of the economy over the coming decade without draconian cuts that would cause serious damage..."
Uh...yeah. But try telling that to these "conservative" clowns in Congress. Apparently the only "fiscal conservatives" to be found in the Beltway these days are among the liberals and moderates of the Democratic Party.  For that matter the "real-live-socialist" in the Senate, Bernie Sanders from Vermont, is a more authentic fiscal conservative than that Ayn Rand acolyte, Cong. Paul Ryan of Wisconsin, or the Minnesota Tea Partier Michelle Bachmann (who apparently gives voice in Congress to the unfortunate folks who forgot to take their medication) because he's not selling the fiscal patent medicine of tax-cuts while yammering incoherently about  "budget balancing."
The CBPP has more, which I'll excerpt - along with their great charts: 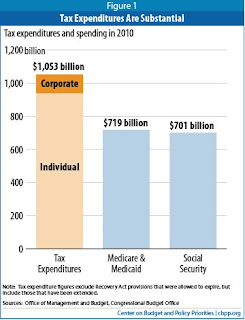 In 2010, the tax code included over $1 trillion a year in tax expenditures (i.e. tax credits, tax incentives - special  tax breaks & "loopholes," etc.)   This far exceeded the cost of Medicare and Medicaid combined ($719 billion), or Social Security ($701 billion), or non-security discretionary programs, which stood at $589 billion or a little over half the cost of tax expenditures.  (See Figure 1.)
Martin Feldstein, the Harvard economist who served as Chairman of President Ronald Reagan's Council of Economic Advisers, wrote last summer that tax expenditures are the single largest source of wasteful and low-priority spending in the federal budget and should be the first place that policymakers go to restrain spending. 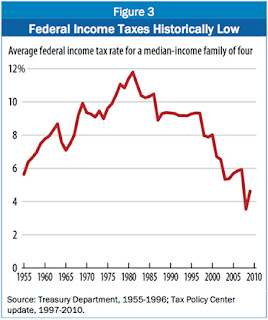 Also, the CBPP reports, "Federal taxes are now at historically low levels (see Figure 3)."
Which, of course, you wouldn't know from listening to the "don't tax our super-rich friends" crowd in Congress, posing as "deficit hawks." 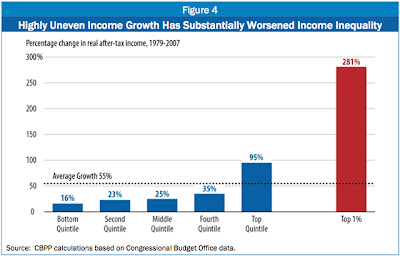 And of course, CBPP charts the "dirty secret" of the American economy over the last thirty years -  the backdrop to so much rotten "public policy" that has driven up national debt under  the rubric  of "fiscal conservatism," while unleashing a power-grab in our political system by the super-rich and the largest corporations.
Income inequality has grown dramatically, and the economic elite have taken an absurdly over-size share of the benefits of economic growth for the past thirty years. Since Reagan - if we want to put a political marker on this debacle.
The CBPP report puts a very moderate - conservative, really - goal of keeping deficits down to 3% of of GDP at the center of their report - a figure "even economists" generally agree is sustainable.  But they also note, as background to any long-term solutions:  "The United States has higher degrees of poverty and inequality than most other Western industrialized nations.  Deficit reduction ought not to make these problems worse."
The solution to an economic problem shouldn't make our overall economic problems worse? Ya think?

This gives you a sketch of CBPP's framework and assumptions for controlling deficits over the longer term. (Of course, controlling health care costs is a big piece of the problem, which will require additional reforms to make the system more effective - in terms of both costs and delivery of services.)
If you want to dig deeper into what actual "fiscal conservatism" might look like, check out the entire CBPP report HERE.
Posted by Bruce Schmiechen at 3/26/2011