And some people rob you with lobbyists re-writing the tax laws.
It's been reported widely - including here - that General Electric paid zero taxes on over $14 billion in profits for 2010. What's gotten a bit less attention is the part of the story where GE not only doesn't pay any taxes, but got a "tax benefit" of $3.2 billion - which presumably means that Uncle Sam owes GE a multi-billion dollar credit against future taxes (assuming the sharks at GE ever are liable for any.)

As the New York Times story explains in painful and anger-inducing detail, GE is typical of large corporations - although obviously more skilled than many - in employing a small army of well-funded lobbyists to work Washington for tax breaks, loopholes, "incentives", "credits", etc. - ad nauseum.
This is the background to what are called "tax expenditures" - i.e. money that the US Treasury forgoes on taxable income and corporate profits because of various "work-arounds" as fine print  written into the tax code.  It is a huge issue for corporations like GE, but it's an imbalance in our tax system that comes into play with taxation on wealthy individuals as well. 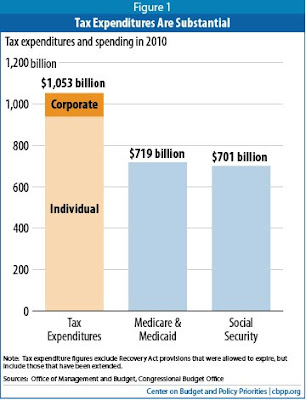 Yesterday we posted this chart from the Center for Budget & Policy Priorities that showed the impact of total tax expenditures on the budget. Compared even to the "austerity crowd's" targeted budget bogeymen of Medicare or Social Security - over which they are attempting to create hysteria - these tax breaks, loopholes, credits, etc. are a huge piece of the fiscal story around deficits.
And, in truth, the story is a bit complicated.  General Electric, for example, in a small piece of it's tax avoidance puzzle, takes alternative energy tax credits for producing wind turbines. Tax incentives for alternative energy are, as a general rule, a good thing in the minds of most of us who don't want to be hostage to foreign dictators or oil companies.

But the tax code is written so that an ultra-profitable mega-corporation can actually benefit more from these tax breaks than a smaller start-up company in alternative energy - which is presumably the kind of entrepreneurial innovator that most of us think of when we hear about "alternative energy tax credits."  I'm not an expert on the economics of alternative energy, but for my money - which is in a sense what we're talking about - I hate to see General Electric exploiting these incentives when it is making money hand over fist and paying zero taxes already.  There could clearly be some scaling of alternative energy incentives to kick in at different levels for companies at various stages of profitability. Or, alternatively, stimulate demand for wind turbines by crediting the consumer end of the deal if a municipality or heavy energy user is buying product from a giant producer like GE.  Surely there are better alternatives than the US Treasury actually owing one of the most profitable corporations in the world, even after the fact that they've paid no taxes whatsoever. Not a dime.
On the level of the individual taxpayer, the CBPP had a good example of how tax expenditures credited toward middle-class and wealthier families are more "invisible" in budget discussions than the cost of similar programs directed toward lower-income folks:

The two types of subsidies differ, however, in their availability to eligible families.  The low- or moderate-income parent may fail to get any subsidy to help with her child care costs, because the spending programs that provide these subsidies are not open ended; they can serve only as many people as their capped funding allows.  By contrast, the child care subsidies for higher-income households are guaranteed, because the child care tax subsidy operates as an open-ended entitlement (and there is no limit on how large a family's income can be to claim this tax credit).

So the cost of programs that help those most in need are directly on the budgeting table, while an essentially identical program - that might actually cost the public more and that pays off for people across the income spectrum - is in the more shadowy "fine print" column of tax credits.
I'm not saying we should eliminate all tax credits. But why aren't we hearing as much noise about taking a hard look at this area where we could clearly make "cuts" on the upper end as we are about an alleged "crisis" in Social Security or Medicare.  Corporations and the wealthiest individuals are using loopholes that are simply increasing deficits and the burden on average tax payers, who don't have an army of tax lawyers or a "Department of Tax Avoidance" to move money around,  but are maybe using Turbo-Tax on the home computer if they're "really sharp."  (And God help the poor suckers who are sitting at the kitchen table with a #2 pencil, a calculator and a yellow pad!)
As the Times article on General Electric makes clear, in the case of big inside players they're not merely "using" these tax expenditures, credits, etc. to gain mult-billion dollar advantages - their lobbyists, business associations  and Political Action Committees are, in effect, making sure the tax code is written to create the loopholes in the first place.
Hands off Social Security, Medicare and safety nets!  If Congress wants to negotiate over cuts, start with tax credits to sharks like GE!