Inflation? Bring it on!

Michael Hiltzik @ LA Times explains why inflation, in current context, should be embraced as one piece of the solution to the lingering legacy of global financial crisis:


Wars and other crises have a way of remaking your oldest enemies into your best friends (and vice versa — just look at the history of U.S.-Soviet relations from 1939 to 1945). 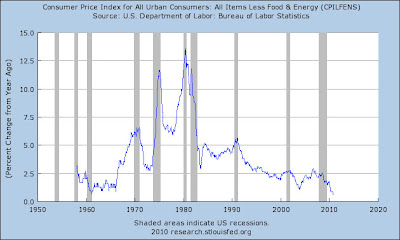 Given the depth and persistence of the financial crisis here and in Europe, isn't it time to embrace one of our oldest economic foes, inflation?

The way most people think about inflation is reminiscent of the old National Lampoon cover line about pornography: "Threat or Menace?" But the idea that inflation might be our friend is gaining traction, and not only among progressive economists such as Paul Krugman. The notion has been spotted recently on the Wall Street Journal editorial page, and its clearest expression yet has appeared in the most recent issue of the Milken Institute Review — neither venue being known as a breeding ground of the virus known as economic liberalism.

The discussion focuses on how inflation reduces the debt burden. Debt is a head wind against recovery right now. But if you're a debtor paying a fixed rate of interest, like many homeowners, inflation is good for you — as prices, and hopefully your wages, rise, your mortgage burden falls relative to your income. On the other side of the coin, though, your lender is getting paid back with dollars lower in value than the ones he lent you.

That's the point of the Milken Review paper by economists Menzie Chinn of the University of Wisconsin and Jeffry Frieden of Harvard. The idea, as they put it, is that debt is almost always denominated at fixed interest rates, so as prices and wages rise, the relative debt load falls.

To set up world economies for more growth, Chinn told me, "The important thing is to shrink the size of debt contracts." Up to now, European countries have been trying to do that through austerity — cutting government spending and services, forcing down employment and wages.

"You see people trying to grind their way to balanced budgets and hence stabilize debt levels," Chinn says, "and it's excruciatingly hard. Because of the political difficulties in taking austerity measures over the long term, you have to ask yourself if it's feasible."

American policymakers seem to have bought into the same strategy, which is why job cuts at the state and local government level have almost outweighed gains in the private sector, producing crummy employment growth overall.

Sooner or later, American politicians may discover, as have some of their European colleagues, that imposing austerity on one segment of the population (the working class), while exempting another (the debt-holding class), is a good way to lose your job.

The question boils down to whether U.S. economic policy will be slanted to favor mortgage payers or mortgage bankers. So far the debate favors the bankers.

Chinn and Frieden, along with such other inflation doves as Charles L. Evans,, president of the Federal Reserve Bank of Chicago, aren't talking about letting inflation go nuts. They're talking about a temporary rise to 4% to 6% from today's benchmark of 2%. (Evans proposes allowing inflation to rise to 3%.) And Chinn acknowledges that inflation is not a cure-all. "It can't solve all the problems on its own," he says.

In the near term, moreover, inflation could cause pain for the wrong people. Chinn and Frieden write rather trustingly that as prices rise, wages follow — an essential process if inflation is to cut the debt burden for families. But in an era when the middle class and working class have no ability to keep their wages from being unrelentingly forced lower, who's to say that employers will respond to rising prices by paying employees more?

Another question is how to inject some inflation into the economy, but not too much.

That's important because today's atmosphere of inflation panic stems largely from periods of hyperinflation, especially the Weimar years in Germany between the wars.

In a speech last year, the Fed's Evans proposed tying inflation policy to the U.S. unemployment rate. Let the Fed make an explicit statement that it would keep interest rates low until unemployment fell to, say, 7.5% or 7%. It's currently 8.2%, and full employment is normally judged to occur at about 6%.

By signaling that the Fed would hold off tightening until the economy was well back on its feet, that would allow prices to rise without raising fears that the Fed would act precipitately to choke off inflation. It would also help, Chinn and Frieden say, if the Fed made an explicit commitment to allowing higher inflation. The invisible machinery of the economy, made up of banks, manufacturers and other economic "agents," would move organically to fill in the gap.

Inflation hasn't always been regarded as the fearsome gargoyle it is now. In fact, it's more commonly been treated as a useful policymaker's tool in times of economic crisis. It was the principle underlying the Democratic Party's attack on the gold standard in 1896 — that's what William Jennings Bryan's "Cross of Gold" speech was all about.

Stable prices, it was understood then, benefited bondholders and other creditors by maintaining the value of their claims at the expense of debtors and the working class. That's still true.

In the 1930s, the need to inject inflation into the economy to combat the Depression was also widely accepted, and the Roosevelt administration kept trying, with uneven success. In part the reason was that its policies were more effective at pushing up the prices of manufactured goods than farm goods, with the result that the agricultural crisis got worse.

At one point, FDR came under the sway of an economic charlatan who persuaded him to try pushing up farm prices by manipulating the dollar price of gold. That didn't work, but the idea that moderately rising prices would help grow the economy was fundamentally sound. Anyway, no one says economics is easy.

In the years since then, the idea became ingrained that 2% inflation was the right and natural thing. Both the Fed and the European Central Bank, which is required by its charter to maintain "price stability," use 2% as their target. The ECB's outlook is still constrained by the German experience of the 1920s, but the lesson for Americans is, or should be, very different.

That's because inflation had a lot to do with the sharp reduction in gross federal debt after the end of World War II, the only time that the U.S. government carried debt higher than today as a percentage of gross domestic product. In 1946, gross federal debt reached nearly 122% of GDP; but within 10 years the figure had dropped by nearly half, to 69.3%. By 1975 it was down to less than 35%.

Economic growth had a lot to do with this trend, but inflation also played a significant role, according to Joshua Aizenman of UC Santa Cruz and Nancy Marion of Dartmouth. Over those first 10 postwar years, they calculate, inflation averaged only 4.2%, but still accounted for a fifth of the debt reduction.

Today, even among Democrats, economic policy is in the hands of deficit and inflation hawks. Their policies plainly benefit too narrow a segment of the population. The bond-holding class doesn't have to sacrifice a penny of its wealth as long as the mantra of "shared sacrifice" applies solely to Americans who earn wages and pay mortgages. For the latter, a little taste of inflation may mean a lot. Without it, the whole economy may continue to just stagger along, and in the long term that's not good for anybody.