"It's cheaper for the U.S. to finance its debt today than it was when we last had surpluses" 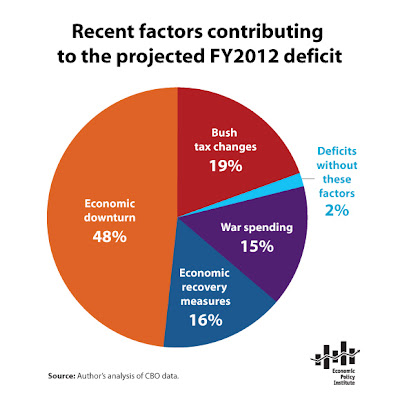 The much-hyped hysterics pushing deficit reduction as some "solution" to our woes in the midst of our Great Recession were terrible economics any way you look at it.

That this agenda was rooted as much in the GOP's desire to worsen the economy as their back door to the White House and control of Congress more than any faith in "markets" seems likely given what the actual markets for US debt were telling us as the debate unfolded. Ezra Klein at Wonkbook:


In Washington, 2011 was all about dangers posed by America’s deficits. Republicans said deficit reduction was priority number one. Democrats mostly went along. But in the markets, the story was precisely the opposite. As Daniel Kruger reports in Bloomberg, demand for American debt was stronger in 2011 than in any year since 1995. It's cheaper for the U.S. to finance its debt today than it was when we last had surpluses...


The Treasury Department keeps track of something called "Daily Treasury Real Yield Curve Rates." It's the actual rate -- the one that takes into account expected inflation -- at which the United States can borrow. And something amazing has happened to it in the past year. For three-year, five-year, and 10-year treasuries, the rate has turned negative. That is to say, the market is so afraid of losing money in the dangerous, uncertain world out there, that they'll pay us to keep their money safe for them.

That's a sad commentary on the state of the global economy. But it's an incredible opportunity for us. It means that any investment with any positive rate of return is an investment worth making. Infrastructure clearly fits that bill. Not only is the likely return high, but if we don't do it now, we'll need to do it later, when our borrowing costs will be higher.

But the conventional wisdom -- the wisdom that says the only responsible thing to do is cut -- stands in our way. If we were going by the numbers, the path forward would be clear: Borrow now, when we can get money for free, when we have millions of unemployed Americans to put back to work, and when the economy is in desperate need of more demand. But don't stop there. At the same time, pass a large and credible deficit-reduction plan that covers, says, 2014-2023, and cuts federal borrowing as the global economy recovers and interest rates rise. in other words, make investments now, when it's cheap, but begin working on an exit strategy for a few years from now, when borrowing becomes expensive again.