Excellent primer on the capital gains tax, a loophole that exempts the wealthy from paying the same tax rates on income as ordinary folk pay on wages, by Steven Mufson and Jia Lynn Yang at The Washington Post:


The K Street office of Mark Bloomfield, president of the American Council for Capital Formation, is full of knickknacks collected in three decades of lobbying for cutting the capital gains tax.

The coffee table has campaign buttons that read “Capital Gains = Better Jobs.” One wall displays a blown-up cartoon retracing the steps that led President Jimmy Carter to reluctantly sign a cut in the capital gains tax rate. On a shelf sits a framed, handwritten note from President George W. Bush in December 2003 that says: “Dear Mark, I got your treatise on taxes — many thanks. I will look it over with keen interest. Merry Christmas.” 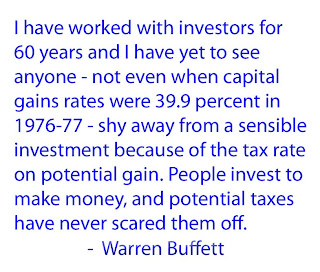 For the very richest Americans, low tax rates on capital gains are better than any Christmas gift.

As a result of a pair of rate cuts, first under President Bill Clinton and then under Bush, most of the richest Americans pay lower overall tax rates than middle- class Americans do. And this is one reason the gap between the wealthy and the rest of the country is widening dramatically.