Are Medicare cuts "on the table" in the debt ceiling hostage negotiations - and, if so, why?

Paul Krugman addresses this deep concern - which is shared by the general public, not just "partisan" or "ultra-liberal" Democrats - over including Medicare cuts as part of the debt ceiling wheeling and dealing: 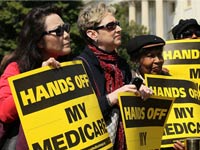 The crucial thing to remember, when we talk about Medicare, is that our goal isn’t, or at least shouldn’t be, defined in terms of some arbitrary number. Our goal should be, instead, to give Americans the health care they need at a price the country can afford. And throwing Americans in their mid-60s off Medicare moves us away from that goal, not toward it.