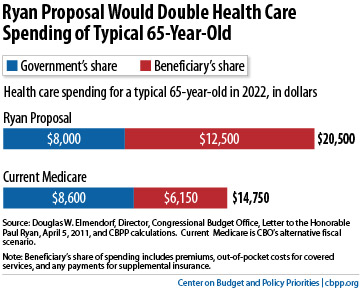 Note the huge difference, not just in doubling of each senior's personal share of costs, but in total spending on health care markets per senior under Medicare vs. "Ryancare."  I'm speechless. Except to note this: anyone who endorses this plan that dramatically drives up total expenditures on an already rapidly-inflating health insurance/delivery system and claims to be a "fiscal conservative" is either a liar with a hidden agenda (privatization at any cost?)  or a moron.  It really is that simple. The non-partisan Congressional Budget Office numbers speak for themselves.

Thanks to the CBPP for another great chart.
Posted by Bruce Schmiechen at 5/28/2011 No comments: Links to this post

A bit of a bright spot in manufacturing and exports?

While the numbers pale in comparison to overall job loss and continuing unemployment, over 200,000 jobs were added over the past year in the manufacturing sector. No administration has been able to match those figures in growth of manufacturing employment since Bill Clinton in 1998.  Here's a chart showing manufacturing job growth since 1997, via The Economist:


According to the Commerce Department, manufacturing - which has been shrinking in this county over decades - is actually leading the recovery due to growing exports:


"The 200,000 jobs added in the past year have been concentrated in the durable goods sector, whose advance report on shipments and new orders for April will be released this Wednesday.  Exports of durable manufactured goods have jumped 13.1 percent over the year, with exports accounting for roughly 37 percent of the growth in shipments over the past year."

Overall economic news is still very bleak, but an uptick in the anemic manufacturing sector and some significant growth in our exports might well signal structural improvements in an economy that has been bleeding jobs overseas and been wildly imbalanced on the trade front for almost as many years as I can remember.
Posted by Bruce Schmiechen at 5/28/2011 No comments: Links to this post