How to End This Depression

The depression we’re in is essentially gratuitous: we don’t need to be suffering so much pain and destroying so many lives. We could end it both more easily and more quickly than anyone imagines — anyone, that is, except those who have actually studied the economics of depressed economies and the historical evidence on how policies work in such economies.


The truth is that recovery would be almost ridiculously easy to achieve: all we need is to reverse the austerity policies of the past couple of years and temporarily boost spending. Never mind all the talk of how we have a long-run problem that can’t have a short-run solution—this may sound sophisticated, but it isn’t. With a boost in spending, we could be back to more or less full employment faster than anyone imagines. 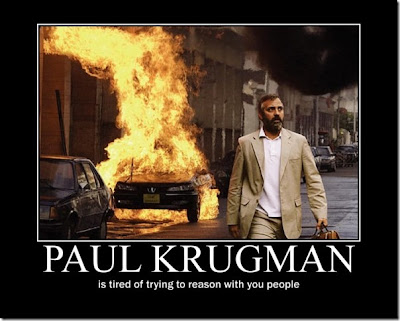 But don’t we have to worry about long-run budget deficits? Keynes wrote that “the boom, not the slump, is the time for austerity.” Now, as I argue in my forthcoming book—and show later in the data discussed in this article—is the time for the government to spend more until the private sector is ready to carry the economy forward again. At that point, the US would be in a far better position to deal with deficits, entitlements, and the costs of financing them.

Meanwhile, the strong measures that would all go a long way toward lifting us out of this depression should include, among other policies, increased federal aid to state and local governments, which would restore the jobs of many public employees; a more aggressive approach by the Federal Reserve to quantitative easing (that is, purchasing bonds in an attempt to reduce long-term interest rates); and less timid efforts by the Obama administration to reduce homeowner debt...

The politics of achieving that?  Okay, that's more difficult. Krugman discusses the evidence for his argument and the obstacles to achieving rational policy to end what he forthrightly calls "this depression" at length in his current New York Review of Books article, HERE.
Posted by Bruce Schmiechen at 5/04/2012 No comments: