Still thinking about the new GOP idea — hey, let’s go for white voters! Why didn’t we think of that before? ... I’m venturing into political science territory here,and would be happy to have real experts weigh in; but I’m pretty sure I have the basics right here.

So, let’s look at some exit poll data, and cross-tab it with Census income data. In the figure below, the red lines show the income-voting relationship from the Times summary of exit polls, which also supplies the broad ethnic group data. For incomes, I use Census data on median household income for 2011, which is also available for regions. For voting I use Alabama to represent the South, Ohio to represent the Midwest.

So here’s my picture: 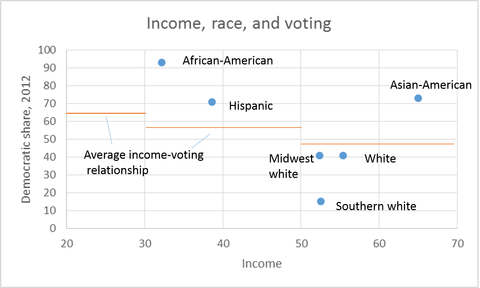 Contrary to what some people keep saying, people with higher incomes, other things equal, tend to vote Republican. Cut through the noise and fog, and it is true that Democrats broadly want to redistribute income down, and Republicans want to redistribute income up — and on average, voters get that (which is why “libertarian populism” is hot air). But race and ethnicity also matter, a lot. What you can see right away is that there are three groups that are fairly anomalous.