Lest we forget, it's been a full decade since George W. Bush went on the offensive against the threat to our nation of the Democrats' weapons of fiscal responsibility.  From an AP report shortly after George W. Bush entered the White House in 2001:


(AP)  President Bush said Saturday that the most important number in the budget he sends to Congress next week is the $5.6 trillion surplus it projects over the next 10 years.

That huge projected surplus provides the underpinning of all the administration's tax-cut and spending plans, Mr. Bush said in his recorded weekly radio address.

"A surplus in tax revenue, after all, means that taxpayers have been overcharged," the president said. "And usually when you've been overcharged, you expect to get something back." The surplus figure "counts more than any other" in the budget, he said.

Democrats cautioned that surpluses projected over so long a period can turn into elusive fool's gold. And they continued to insist that as it stands the Bush tax-cut plan unfairly favors the wealthy over those of more modest means.

In his Monday New York Times column titled - apparently without irony - "Where Wisdom Lives",  David Brooks discussed health care systems and the future cost-effectiveness of Medicare, posing Democrats as believing in "top down centralized planning" while Republicans favor "the decentralized discovery system of the market."
Brooks characterizes the Republican Ryancare alternative dishonestly because he doesn't mention that the CBO has projected costs - out-of-pocket and aggregate - as skyrocketing under the scheme to end Medicare in favor of capped vouchers:

Republicans point out that Medicare has tried to control costs centrally for decades with terrible results. They argue that a decentralized process of trial and error will work better, as long as the underlying incentives are right. They suggest replacing the fee-for-service with a premium support system. Seniors would select from a menu of insurance plans. Their consumer choices would drive a continual, bottom-up process of innovation. Providers could use local knowledge to meet specific circumstances. 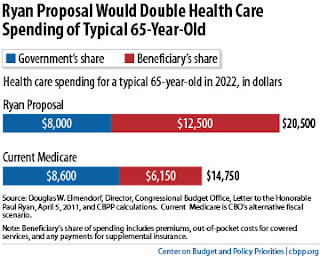 Of course, Medicare as it stands is the most cost-effective piece of our health insurance puzzle.  It's been more successful - as a "volume buyer" negotiating prices - at controlling costs "centrally" than the multiplicity of private insurers have been.  Based on Medicare's current performance versus private insurers the CBO has rated and projected the difference in future cost of privatized Ryancare over Medicare, and it doesn't look good for Brook's "consumer choices" system. (See chart at right.)
And that's leaving aside any questions about the proposition that seniors - nearly all with pre-existing conditions, most with deep concerns about allocating out-of-pocket expenses within the limitations of a fixed and likely very modest income, and inevitably facing increased physical and mental frailty as they age -  would be more interested in ongoing participation in a "continual bottom up process of innovation" rather than security and systemic integrity - the "known" over a "process of discovery."
But Brooks truly goes off the deep end with this allegation: