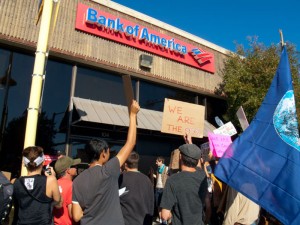 In four days, Bank of America was all set to face protests against its proposed $5 per month debit card fees -- a so-called "Bank Transfer Day." Today, the bank told the protesters they could find something else to do.

We have listened to our customers very closely over the last few weeks and recognize their concern with our proposed debit usage fee. Our customers' voices are most important to us. As a result, we are not currently charging the fee and will not be moving forward with any additional plans to do so.

Is this the first popular victory for Occupy Wall Street?

This narrative - that OWS is starting to gain traction in protecting average citizens against monstrosities like the Bank of America - even if only in small ways - is critical.  People can make jokes about drum circles or other bits of fun or trivia that had been associated with OWS, but if Bank of America's customers see their interests served by the movements inspired by OWS, the last laugh is on the bank and the movement's approval among the general public - which is already high - will grow.

And, of course, despite this significant victory, protestors will find plenty more to do that keeps the financial elite in their sights.
Posted by Bruce Schmiechen at 11/02/2011 No comments: Links to this post