Who checks the bogus "fact checkers" downgrading the President's State of the Union speech?
Jared Bernstein does a pretty good job: 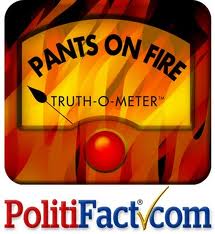 Politifact—the self-anointed fact checkers—grade this statement from the President speech tonight as “half-true:”


“In the last 22 months, businesses have created more than three million jobs. Last year, they created the most jobs since 2005.”

This is not half true or two-thirds true.  It is just true.

So why, I ask you, why do they go where they go?  Because of this:


In his remarks, Obama described the damage to the economy, including losing millions of jobs “before our policies were in full effect.” Then he describe [sic!] the subsequent job increases, essentially taking credit for the job growth. But labor economists tell us that no mayor or governor or president deserves all the claim or all the credit for changes in employment.

Really?  That’s it?  That makes the fact not a fact?  I’ve seen some very useful work by these folks, but between this and this, Politifact just can’t be trusted. Full stop.

Posted by Bruce Schmiechen at 1/25/2012 No comments: Links to this post

Posted by Bruce Schmiechen at 1/25/2012 No comments: Links to this post