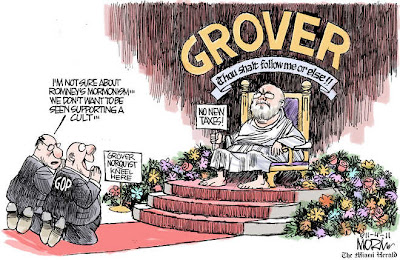 This should get Grover Norquist up off the couch: a paper by a prominent team of economists says the tax rate for top U.S. earners could be hiked to 83 percent without hurting anyone but the “mega rich.” And in what’s sure to add gasoline to the income-inequality debate, they suggest pay increases for the wealthiest few reflect mostly “rent seeking” — econo-speak for unshackled greed — rather than executive-suite productivity improvements.

Thomas Piketty of the Paris School of Economics, Emmanuel Saez of Berkeley and Stefanie Stantcheva of MIT reach those conclusions after disputing that tax cuts in several countries since the 1970s had any real impact on per-capita GDP growth. As they say in their less wonky summary (hat tip to 3 Quarks Daily)... “countries that made large cuts in top tax rates such as the United Kingdom or the United States have not grown significantly faster than countries that did not, such as Germany or Denmark.”

What does show a strong correlation is falling tax rates and the share of pre-tax income held by the top 1 percent — doubled in the U.S., to more than 20 percent, over the past 40 years.  (emphasis added)

Ezra Klein debunks the stunning ignorance of "his colleague" - the modestly endowed Washington Post business writer Robert Samuelson (no relation to noted economist Paul Samuelson) - who true to form spouts the tired and untrue "conventional wisdom" regarding Eurozone troubles being rooted in social spending as % of GDP  and the European model of a robust welfare state:


Speaking of things that the European crisis is not about (debt and deficits), while I was in Germany, my colleague Robert Samuelson wrote that “Europe’s turmoil is more than a currency crisis and was inevitable, in some form, even if the euro had never been created. It’s ultimately a crisis of the welfare state, which has grown too large to be easily supported economically.”

I don’t think that quite works. Take Germany. They have a pretty big welfare state: pensions, health care, paid vacations, unemployment benefits equal to two-thirds of one’s income. Indeed, the Organization for Economic Cooperation and Development keeps track of social spending — unemployment, old-age pensions, health care, etc — as a percentage of GDP. In 2007, Germany spent 25.2 percent of their GDP on such things. Greece spent 21.3 percent on social policies. Yet Greece is in crisis, and Germany is fine.

To bring this across the Atlantic, you could argue that the United States’s debt burden is the product of an insufficiently large welfare state — at least with regard to health care.

"The Wrong Fix" for the Eurozone

Harold Myerson at The American Prospect: (T)he deal that German Chancellor Angela Merkel and French President Nicolas Sarkozy struck to save the Eurozone will inflict years of austerity on European nations that are already mired in depression. Spain, for instance, has an unemployment rate of about 20 percent and a youth unemployment rate that is approaching a mind-boggling 50 percent. It needs a massive Keynesian jolt to its economy, not budgetary constraints that will condemn it to a decade or quarter-century of penury...

(T)he Merkel-Sarokzy solution was based on a misdiagnosis of Europe’s woes. Some of Europe’s current basket cases were actually running budget surpluses in the years before the Lehman meltdown. Ireland and Spain weren’t overspending at all—but the banks and investors speculating on their housing markets most certainly were. When their banks went under, their economies collapsed, driving their unemployment rates, and their budget deficits, sky-high. If Ireland and Spain could do it over again, they’d have adopted far tighter bank regulations—something that the Merkel-Sarkozy deal doesn’t call for...