Congressman Paul Ryan is back putting the GOP's tax-cut and austerity strategy on the table. Ezra Klein at the Washington Post comments on what he sees an as inevitable gutting of the social safety net given the tax-cuts-for-millionaires ideology, coupled with a clamor for short term deficit reduction, at the core of every GOP economic proposal: 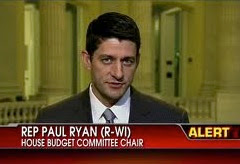 Ryan's budget asks for enormous sacrifice from, say, disabled Medicaid beneficiaries even as it appears to provide enormous tax benefits to wealthier Americans. The same is true for Romney's budget, and, in even more exaggerated ways, for the fiscal promises made by Newt Gingrich and Rick Santorum. The Republican Party has backed itself into a fiscal strategy in which this kind of concentrated sacrifice on the part of the poor is the only possible path forward.


Imagine a politician held a press conference in order to boast about a plan that would take health insurance away from tens of millions of people, while effectively eliminating the federal government except for entitlements and defense spending. You probably can’t, because no politician would ever do that.

Except Paul Ryan just did.

No, he didn’t put it in quite those terms. Instead, Ryan on Tuesday unveiled the latest version of his proposal for the federal budget, which he calls the “Path to Prosperity.” He vowed that it would reduce deficits, promote economic growth, and strengthen the safety net. The first two claims are dubious, at best. The third is just dishonest—and, if taken literally, morally bankrupt.

From afar and even up close, the new Ryan budget actually looks a lot like the old Ryan budget. It calls for a reduction in taxes that, if implemented, would likely give a disproportionate share of benefits to the wealthy. It calls for radically reducing discretionary spending, so that it is less than 4 percent of gross domestic product by 2050. And it calls for transforming Medicare into a voucher system.

Officially, the end result would be lower deficits, lower even than the deficits that President Obama’s latest budget proposal would produce. And that’s a major selling point for Ryan and the Republicans. But the numbers seem more than a little fanciful.

For one thing, Ryan envisions a reduction in non-defense discretionary spending to levels this country hasn’t had since just after World War II. According to the Center on Budget and Policy Priorities, by 2050 “most of the federal government aside from Social Security, health care, and defense would cease to exist.” That’s everything from air traffic control to medical research to food inspections to Pell Grants, by the way. If the Ryan budget somehow became reality then you might have to give up on college and avoid air travel—assuming you survived the food poisoning and killer diseases.

Read the rest of Cohn HERE.

And more HERE from Jon Chait on the "GOP's Plan to Save America From the Poor"
Posted by Bruce Schmiechen at 3/21/2012 No comments: Links to this post