Bernie makes the case on the budget "deal".

Via Balloon Juice
Posted by Bruce Schmiechen at 6/28/2011 No comments:

I hope Paul Krugman is being hyperbolic. I fear he's not: 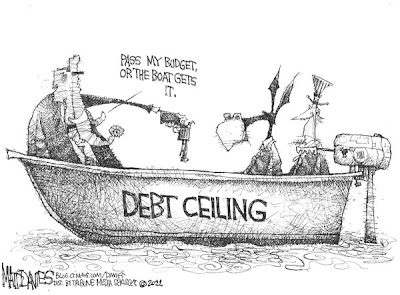 So, here’s where we are on the debt limit discussions: Democrats have agreed to large spending cuts, but are holding out for doing something about


a rule that lets businesses value their inventory at less than they bought it for in order to lower their tax burden, a loophole that lets hedge-fund managers count their income as capital gains and pay a 15 percent marginal tax rate, the tax treatment of private jets, oil and gas subsidies, and a limit on itemized deductions for the wealthy.

And Republicans walked out.

Think about it. There’s a significant chance that failing to raise the debt limit could provoke a renewed financial crisis — and Republicans would rather take that chance than allow a reduction in tax breaks on corporate jets.

What this says to me is that Obama cannot, must not, concede here. If he does, he’s signaling that the GOP can extract even the most outrageous demands; he’s setting himself up for endless blackmail. A line has to be drawn somewhere; it should have been drawn last fall; but to concede now would effectively mean the end of the presidency.

The dangers of playing politics with the debt ceiling


Does underscoring the sense of urgency simply give strength to dark forces who are trying to leverage the threat of default for their political gains? Perhaps so, but the other way lies madness. 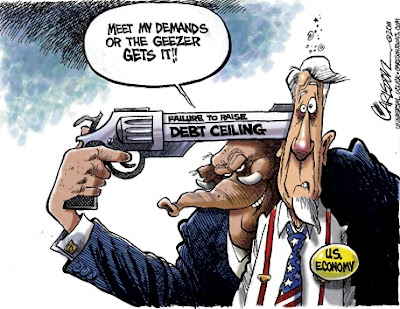 We’ve got to talk truth about the stakes here because they’re so high...

(W)hy do interest rates remain low?  Why are investors in ten-year US treasury bonds accepting 2.93% interest today instead of insisting on a big rate premium the way bond investors in, oh, I don’t know…GREECE are??

Because they assume we’ll get our act together and raise the debt ceiling well in advance of Aug 2.  That’s the date when the Treasury will have exhausted their ability to move money around to cover their obligations while staying under the debt limit.

But what if that assumption should weaken?