"How the Case for Austerity Has Crumbled"

Professor Krugman has a long essay 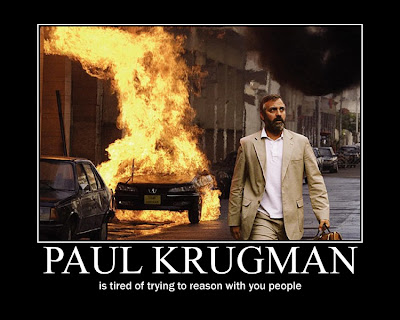 on the austerity fallacy
HERE, @ NY Review of Books

Posted by Bruce Schmiechen at 5/14/2013 No comments: Links to this post

The recent slowdown in health-care costs is one of those facts, like climate change or the rapid growth after Bill Clinton raised taxes, that flummoxes American conservatism. The slowdown of health-care costs is one of the most important developments in American politics. The long-term deficit crisis — those scary charts Paul Ryan likes to hold up, with federal spending soaring to absurd levels in a grim socialist dystopian future — all assume the cost of health care will continue to rise faster than the cost of other things. If that changes, the entire premise of the American debate changes. And there’s a lot of evidence to suggest it is changing — health-care costs have slowed dramatically, and experts believe it’s happening for non-temporary reasons.

The general conservative response to date has involved ignoring the trend, or perhaps dismissing it as a temporary, recession-induced dip likely to reverse itself. Yesterday, the Wall Street Journal editorial page offered up what may be the new conservative fallback position: Okay, health-care costs are slowing down, but it has absolutely nothing to do with the huge new health-care reform law. “It increasingly looks as if ObamaCare passed amid a national correction in the health markets,” the Journal now asserts, “that no one in Congress or the White House understood.” It’s another one of those huge, crazy coincidences!

Of course, it’s not just that the Journal didn’t predict the health-care cost slowdown. The Journal insisted it couldn’t possibly happen. Indeed, it insisted that Obamacare would destroy — was already destroying — any possible hope for a health-care cost correction, and would instead necessarily lead to a massive increase in health-care inflation.

Why Washington saved the economy, then permanently destroyed the labor market 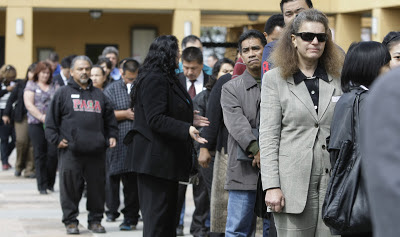 right? A hearing in Washington is like a fern in the rainforest. But this hearing was notable for both its subject and its attendance. It was a meeting about the most important economic crisis facing America today: long-term unemployment.

At 10:30am, the hearing began. She was the only attendant.

***
I have two stories for you about Washington and the economy. Both true. But very different.

The first story is called: How Washington Saved the Economy. You might begin in 2008, when the Federal Reserve went on an unprecedented spree of asset-buying to un-gunk the banks, push down interest rates, and spur investing in mortally weakened economy. This was followed, in 2009, with an equally historic stimulus package aimed at filling holes in state budgets and sending cash back to families and businesses. The government ran steep $1+ trillion deficits to keep as much money in the weak private sector as possible.


There is little question that monetary and fiscal stimulus blunted the recession -- and saved the economy.

The second story is called: How Washington Permanently Scarred the Labor

Market. You might begin this story in 2011, when Congress (led by Republican obstructionism) embarked on a historic quest to crush deficit spending by any means necessary. Hold the economy hostage over the debt ceiling? Check. Kill the American Jobs Act while scheduling a too-awful-to-be-a-real-law sequester? Check. Allow the too-awful-to-be-a-real-law sequester to become a real law? Checkmate.

The deficit fell fast. As unemployment ebbed, the ranks of long-term jobless calcified, creating two separate job markets. One broken market for people out of work for more than six months. And another slowly healing market for everybody else. But the combination of a thermostatic recovery and a deep aversion to stimulus crushed any hope that the long-term unemployed would get the help they needed. Long-term unemployment isn't special just because it's longer; it's special because it's self-perpetuating. Skills atrophy, networks dry up, and employers discriminate, creating a vicious cycle of joblessness that can't be cured by normal economic growth.

There is little question that, in the last two years, Washington has essentially left the long-term unemployed to fend for themselves -- and permanently scarred the labor market.

***
This isn't so much a tale of two cities, but a tale of one city that responded differently to two crises: (1) the collapse of the financial system and (2) the scarring of the labor market. These are both emergencies. So why did we respond to the first emergency like an ambulance siren and the second like a harmless murmur of white noise?