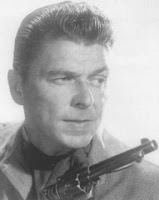 We hear this all the time: "President Obama is a big spender." Or, from the growing Krazy Korner of the GOP (which includes the rhetoric of every one of their current Presidential aspirants), some sort of "socialist" who is enmeshed in a European-style Big Government pattern that takes us far afield from the fiscal restraint of...say...that all-purpose conservative icon, St. Ronald Reagan (The Imagined.)

Here's a graph from Mark Thoma that shows growth in real government spending per capita under Presidents from Nixon to Obama (annualized.)

So the only President in recent history who has shown more fiscal restraint than President Obama is...Bill Clinton?  The GOP partisans - up to and including the "moderate" Willard M. Romney - need to stop following those FOX News crazy-talk scripts and cut out the lying.
Posted by Bruce Schmiechen at 3/19/2012 No comments: Links to this post 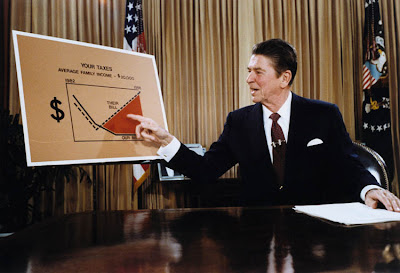 Since World War II, the top rate has ranged from less than 30 percent (at the end of the Reagan presidency) to more than 90 percent (throughout the Eisenhower years). The 1964 Kennedy-Johnson tax cut significantly reduced the typical marginal rate paid by American families, but rates rose greatly over the next 15 years as inflation pushed people into higher tax brackets. Rates fell sharply under President Reagan, rose under President Bill Clinton and fell again under President George W. Bush.


If you can find a consistent relationship between these fluctuations and sustained economic performance, you’re more creative than I am. Growth was indeed slower in the 1970s than in the ’60s, and tax rates were higher in the ’70s. But growth was stronger in the 1990s than in the 2000s, despite noticeably higher rates in the ’90s...
I can’t say marginal rates don’t matter at all... But the strong conclusion from available evidence is that their effects are small. This means policy makers should spend a lot less time worrying about the incentive effects of marginal rates and a lot more worrying about other tax issues.


Most obviously, the federal budget is on a collision course with reality. Reining in the long-run deficit will have to involve slowing the growth rate of spending. But unless we choose to gut Medicare and Medicaid, additional tax revenue will be needed. This essential truth is the No. 1 factor that should be driving tax policy. And anyone who tells you that the way to raise revenue is to cut marginal tax rates is arguing from ideology, not solid evidence.

Posted by Bruce Schmiechen at 3/19/2012 No comments: Links to this post


It’s said that you can judge a man by the quality of his enemies. If the same principle applies to legislation, the Affordable Care Act — which was signed into law two years ago, but for the most part has yet to take effect — sits in a place of high honor.


Now, the act...isn’t easy to love, since it’s very much a compromise, dictated by the perceived political need to change existing coverage and challenge entrenched interests as little as possible. But the perfect is the enemy of the good; for all its imperfections, this reform would do an enormous amount of good. And one indicator of just how good it is comes from the apparent inability of its opponents to make an honest case against it.
To understand the lies, you first have to understand the truth...
The fact is that individual health insurance, as currently constituted, just doesn’t work. If insurers are left free to deny coverage at will — as they are in, say, California — they offer cheap policies to the young and healthy (and try to yank coverage if you get sick) but refuse to cover anyone likely to need expensive care. Yet simply requiring that insurers cover people with pre-existing conditions, as in New York, doesn’t work either: premiums are sky-high because only the sick buy insurance.


Visit msnbc.com for breaking news, world news, and news about the economy