John Cassidy at The New Yorker:


In today’s Wall Street Journal, the Columbia economist Glenn Hubbard, who is one of Mitt Romney’s top economic advisers, has an op-ed piece entitled “The Romney Plan for Economic Recovery.” When I saw the headline, I felt a rush of anticipation: at last, I thought, here is the big new jobs initiative that the G.O.P. campaign is relying on to turn things in its favor. 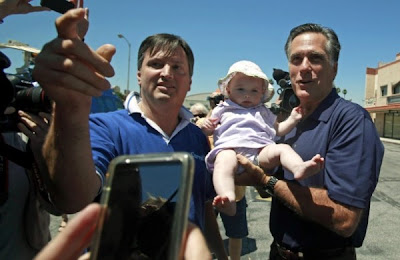 I was mistaken. The first two thirds of Hubbard’s piece is taken up with an attack on the Obama Administration’s economic record: ineffective stimulus, too much regulation, failure to tackle the housing market—all very familiar stuff. When Hubbard eventually gets to laying out Romney’s alternative, there is nothing new either, just a reiteration of the existing policy plaform: a vague promise to cut federal spending and reduce the budget deficit, an even vaguer plan to cut taxes but in a “revenue-neutral fashion,” and a commitment to repeal Obamacare and Dodd-Frank. Judging by this piece, and by recent statements from Romney himself, the G.O.P. campaign still doesn’t have a recovery program worth the name. Indeed, if we are to believe the evidence of our eyes and ears, he remains committed to immediate spending cuts that could well bring on another recession.

Mitt Romney wants to raise your taxes and cut his

The Romney campaign’s increasingly desperate attempts to dismiss a new study of its tax plan are a pretty good sign that the study is devastating. That isn’t to say the campaign is trying to counter it with actual specifics.

Performed by the Tax Policy Center, a joint venture of the Brookings Institution and the Urban Institute, the study shows that Mitt Romney’s proposal would lead to significantly lower taxes for the rich, and a higher tax burden on middle- and lower-income taxpayers.

It’s been well known for a while that Mr. Romney’s tax plan was a mathematical impossibility. He promised to reduce marginal tax rates by 20 percent, eliminate the estate tax and the alternative minimum tax, and end the capital gains tax for middle-income taxpayers – all while not lowering the amount of revenue coming into the treasury. Mr. Romney said he would offset those losses by ending a series of loopholes, but has yet to cite a single loophole he would delete.