I'm sorry but I can't help myself. This is great news: 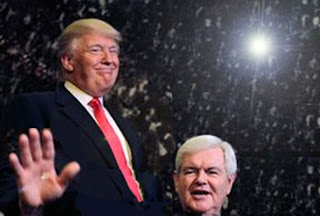 According to Trump advisor Michael Cohen, "Donald J. Trump will be making a major announcement tomorrow at 12:30 p.m. at Trump International Hotel & Tower, Las Vegas, Nevada... The announcement will pertain to the Presidential race." 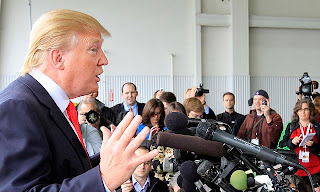 Gingrich enters the Nevada Caucus after getting beat by Mitt Romney in Florida. He has spent the day campaigning in Reno.

Last year, Trump decided not to run for the GOP nomination after attacking President Barack Obama over the validity of his birth certificate.
Update: "I don't know of anybody who does a better job of getting attention by announcing that he will presently announce something," Gingrich told the AP.

Update 2: Epic fail. The Titanic - against all odds - has sunk. We misunder-reported. The Ultra-Donaldest Maxi-Trumpalicious Uber-PsuedoMogul-Entity endorsed Mitt Romney. This, of course, is great news for Barack Obama!
Posted by Bruce Schmiechen at 2/01/2012 No comments:

Email ThisBlogThis!Share to TwitterShare to FacebookShare to Pinterest
Labels: 2012, Conservatism in crisis, Satire, The Crazy

Omigod! David Brooks reads another book...but doesn't really want us to know what it's actually about.

Brad DeLong catches David Brooks in another embarrassment - like not forthrightly telling his readers what the true subject of the book he's frothing over happens to be:

How can a book that explicitly leaves out Asian-Americans, Hispanic-Americans, Amerindians, African-Americans, people of mixed race, and Arab-Americans possibly describe "the most important trends in American society"?


How can the New York Times editors publish a piece without asking David Brooks why he does not dare mention the subtitle of the book he is puffing?

Charles Murray, of course, is the right-wing "think-tanker" currently writing for the American Enterprise Institute and, notoriously,  co-author of "The Bell Curve" tome which argued that differences in intelligence were embedded in race.

About half-way into Brooks' latest adulatory column he notes that  Murray "is at his best" analyzing "behavioral differences" between the well-educated and the poorly educated and that "he’s mostly using data on white Americans, so the effects of race and other complicating factors don’t come into play."

That Murray's entire study of "the most important social trends" is premised as a meditation on the circumstances of white Americans exclusively is rather conspicuously evaded by our deep-thinking gadfly, Mr. Brooks.

And why do I get the feeling that this whole column reeks of nostalgia for a time when people who had "complicating factors" were kept at society's margins, not needing to be accounted for.