Joe Scarborough is an idiot


The deficit scold cause has suffered significant intellectual erosion over the last year or so. In the short run, the interest rate spike they keep insisting will happen keeps not happening. In the long run, the health-care-cost inflation that is at the root of the long-term fiscal predicament is growing markedly less dire. The case for prudent fiscal adjustment remains strong, but the case for  bug-eyed, table-pounding terror is growing increasingly ridiculous. 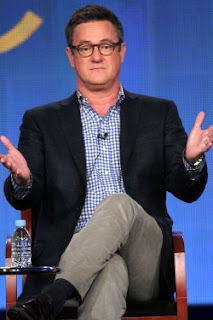 But bug-eyed, table-pounding terror is the stock-in-trade of the fiscal scold movement. And so they are striking back by labeling anybody with a calmer view of the deficit as a “debt denier.” Joe Scarborough, who may have launched the new catchphrase on Twitter, has a new op-ed in Politico brandishing the epithet. Meanwhile, the anti-deficit lobby “Fix the Debt” — for whom Scarborough has served as one of many media spokespersons — has taken up Scarborough’s favorite label with a new campaign, debtdeiners.com, which, alongside its latest attempt to generate a viral dance video, amounts to a concerted counteroffensive against Paul Krugman and others who have ever so slightly mitigated the tone of apocalyptic hysteria surrounding the fiscal debate. They even have their own debt deniers hashtag. They are trying very hard to make “debt deniers” happen.

Let’s examine their case on the merits, not merely as an attempt to create a viral meme.

Analyzing the argument in a Joe Scarborough–authored op-ed is inherently challenging. (The written word in general is just a terrible medium for Scarborough, hiding his winning personality while exposing his inaptitude for analysis.) It mainly consists of using variations of “debt denier” repeatedly to describe his opponents. To his credit, Scarborough finally cites one actual economist who shares his view, a welcome departure from his usual method of answering charges that he is in the grips of an incestuous groupthink driven by non-economist elites by citing the agreement of his non-economist elite friends.