I have previously posted a table showing that people support raising taxes as part of deficit reduction by a 2-to-1 margin over the Grover Norquist/Club for Growth/Tea Party position that the deficit must be reduced only by spending cuts without a penny of higher taxes.

In light of President Obama's new budget plan, which includes higher taxes, I am posting an updated table, including a poll on Friday showing that three-fourths of people support higher taxes and only 21 percent support the doctrinaire right-wing position.

Posted by Bruce Schmiechen at 9/19/2011 No comments: Links to this post

The GOP rejoinder to President Obama's jobs and budget plans is, in short, a reversion to their mantra of tax cuts "uber alles."  They're engaged in hysterics about "Class Warfare!"  Their plan?   Lower taxes create jobs! 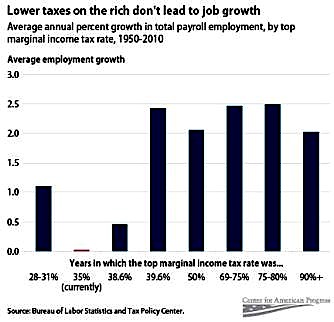 Posted by Bruce Schmiechen at 9/19/2011 No comments: Links to this post

Visit msnbc.com for breaking news, world news, and news about the economy
Posted by Bruce Schmiechen at 9/19/2011 No comments: Links to this post