“We can have democracy in this country, or we can have great wealth concentrated in the hands of a few,” the great liberal jurist Louis Brandeis prophesied in the second decade of the 20th century. “But we can't have both.” 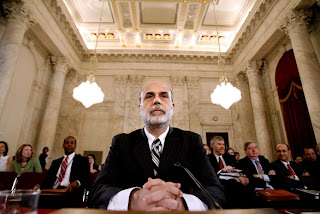 I would not expect these guys could agree on ordering lunch - and while the substance of the commentary is worrisome, it's heartening to see some of the distance lessen between Bernanke and one of the administration's toughest liberal critics:


Fed Chairman Ben Bernanke says the economy is on the verge of another recession—“close to faltering” was his euphuism of choice in his testimony to Congress Tuesday—and there is only so much the Federal Reserve can do about it.

For once, he is mostly right.