The perils of "too big to fail"

Simon Johnson - former chief economist for the International Monetary Fund -  at NYTs "Economix" on the implications and perils of "too big to fail."  (One question as food for thought - if, as Johnson notes, banks are financed mostly by debt rather than equity, why are these institutions so beholden to stockholders, who aren't putting up much stake in the project relative to their ability to profit and the unprecedented "security" of their limited investment because of "too big to fail" ?): 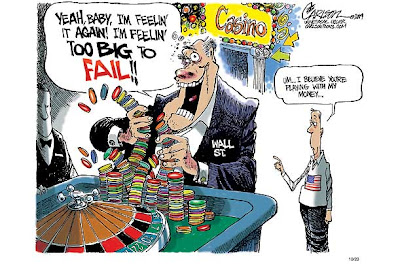 In an interview with The New York Times in July, Sheila Bair, the departing chairwoman of the Federal Deposit Insurance Corporation, said of her experience over the last few years: “They would say, ‘You have to do this, or the system will go down.’ If I heard that once, I heard it a thousand times.”

No responsible official wants the entire financial system to crash; this would be incredibly disruptive to all Americans and potentially lead to a worldwide depression. Knowing this, many people who want bailouts on generous terms use “contagion fear” as part of their sales pitch.

How are we to know if a particular event, like deciding not to bail out a big bank, will lead to contagion that spreads to other financial markets? Contagion is the key issue. 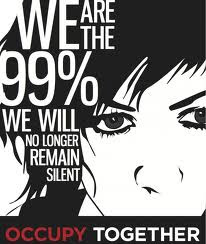 Paul Krugman suggests that the 99% "Big Tent" is actually a bit too small. It's the .1% - yes,  the one-tenth of one-percent, - who are the truly serious  malefactors in our contemporary economy and greatest beneficiaries in the income-inequality story. So, apparently,  we have extreme income inequality even at the upper end of extreme income inequality. Krugman's not exactly pulling out the violin to play a lament for the lower 90% of the top 1%, but his point amplifies the general case regarding what's happened in our economy:


"(T)he 99 percent slogan aims too low. A large fraction of the top 1 percent’s gains have actually gone to an even smaller group, the top 0.1 percent — the richest one-thousandth of the population...

(W)ho are the 0.1 percent? Very few of them are Steve Jobs-type innovators; most of them are corporate bigwigs and financial wheeler-dealers. One recent analysis found that 43 percent of the super-elite are executives at nonfinancial companies, 18 percent are in finance and another 12 percent are lawyers or in real estate. And these are not, to put it mildly, professions in which there is a clear relationship between someone’s income and his economic contribution.

Executive pay, which has skyrocketed over the past generation, is famously set by boards of directors appointed by the very people whose pay they determine; poorly performing C.E.O.’s still get lavish paychecks, and even failed and fired executives often receive millions as they go out the door.

Meanwhile, the economic crisis showed that much of the apparent value created by modern finance was a mirage. As the Bank of England’s director for financial stability recently put it, seemingly high returns before the crisis simply reflected increased risk-taking — risk that was mostly borne not by the wheeler-dealers themselves but either by naïve investors or by taxpayers, who ended up holding the bag when it all went wrong. And as he waspishly noted, “If risk-making were a value-adding activity, Russian roulette players would contribute disproportionately to global welfare.”

Read the whole piece HERE at NYT.
Posted by Bruce Schmiechen at 11/25/2011 No comments: Links to this post