Gangster Bankers: Too Big to Jail

This is several months old, but a "must read" by Matt Taibbi @ Rolling Stone:

The deal was announced quietly, just before the holidays, almost like the government was hoping people were too busy hanging stockings by the fireplace to notice. 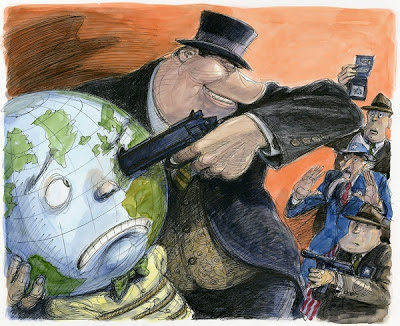 Flooring politicians, lawyers and investigators all over the world, the U.S. Justice Department granted a total walk to executives of the British-based bank HSBC for the largest drug-and-terrorism money-laundering case ever. Yes, they issued a fine – $1.9 billion, or about five weeks' profit – but they didn't extract so much as one dollar or one day in jail from any individual, despite a decade of stupefying abuses.

People may have outrage fatigue about Wall Street, and more stories about billionaire greedheads getting away with more stealing often cease to amaze. But the HSBC case went miles beyond the usual paper-pushing, keypad-punching­ sort-of crime, committed by geeks in ties, normally associated­ with Wall Street. In this case, the bank literally got away with murder – well, aiding and abetting it, anyway.

Read the rest HERE.
Posted by Bruce Schmiechen at 5/21/2013 No comments: Links to this post