Here's a remarkable chart from EPI. Actually, no: Strike that. It's true that in a normal world it would be remarkable, but in the world we live in it's actually totally unsurprising. It illustrates the rise in income inequality over the past three decades (top dark blue line),  and as you can see, it's been rising steadily. Totally unsurprising. 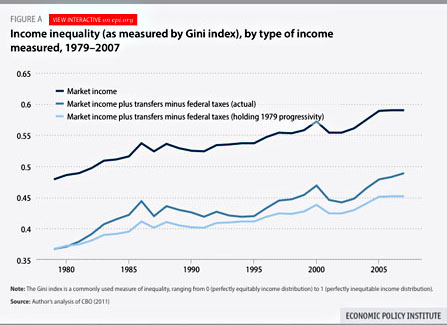 But then author Andrew Fieldhouse did another calculation. The middle blue line shows rising inequality after you account for taxes and transfers. But what if we had the same tax system we did in 1979? Well, inequality still would have gone up, but it would have gone up significantly less (bottom light blue line). In other words, during an era in which the rich were getting richer anyway, we deliberately set out to reduce their tax burdens so that they could become even richer...

Instead of trying to ameliorate the effects of a broad economic trend, we've done everything we possibly can to accelerate it. That includes tax policy, financial deregulation, trade policy, anti-labor policy, and much more. And since there's approximately zero evidence that any of this has actually increased economic growth, it means that U.S. policy for the past 30 years has been aggressively dedicated to shifting income share away from the poor and middle class and into the pockets of the already rich...
Posted by Bruce Schmiechen at 6/17/2013 No comments: Links to this post

More than a year after the national mortgage settlement over robosigning crimes, the systematic abuses continue. Bloomberg:

Mortgage workers falsified records and were told to delay U.S. loan-assistance applications by requesting paperwork that the Charlotte, North Carolina-based bank had already received, according to statements from ex-employees filed last week in federal court in Boston. The lender improperly disqualified applicants to the Home Affordable Modification Program, or HAMP, according to a May 23 statement from Simone Gordon, a loss-mitigation specialist who left the company in 2012.


Bank of America Corp. is being sued by homeowners who didn't receive permanent loan modifications after making payments under trial programs, according to court papers. Photographer: Davis Turner/Bloomberg

“We were regularly drilled that it was our job to maximize fees for the bank by fostering and extending delay of the HAMP modification process by any means we could,” Gordon said. Managers instructed staff to “delay modifications by telling homeowners who called in that their documents were ‘under review,’ when in fact, there had been no review,” she said.