Contrary to Walmart’s self-glorifying mythology, the retailer is anything but a job creator — in fact it is a huge job killer. Not only that, destroying jobs is an essential component of Walmart’s anti-worker business model. Let’s put aside Walmart’s happy talk and examine the cold, hard facts. 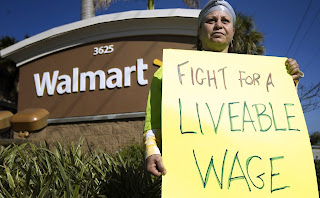 First, let’s look at the impact of Walmart on local labor markets. The largest, most rigorous study conducted on the subject is this peer-reviewed article from 2008. Its lead author is economist David Neumark, who is no wild-eyed liberal. (See, for example, this anti-minimum wage op-ed he wrote for the Wall Street Journal).

Earlier studies did not adequately deal with selection bias: i.e., the problem that when and where Walmart chooses to open new stores is not random, but tends to be correlated with other variables. Those confounding variables make it difficult to determine whether local employment outcomes are causally related to Walmart‘s entry, or to something else. I’ll skip the technical details, but suffice it to say Neumark and his co-authors devised a sophisticated methodology that accounts for the selection bias. Using data from over 3,000 counties, their results show that when a Walmart store opens, it kills an average 150 retail jobs at the county level, with each Walmart worker replacing about 1.4 retail workers. These results are robust under a variety of models and tests.

Other strong studies found similar results. A 2008 peer-reviewed study that looked at Maryland concluded that Walmart’s presence significantly decreased retail employment, by up to 414 jobs. And a 2009 study by Loyola University found that the opening of a Chicago Walmart store was “a wash,” destroying as many jobs as it created: “There is no evidence that Wal-Mart sparked any significant net growth in economic activity or employment in the area,” according to the report. In short, when Walmart comes to town, it doesn’t “create” anything. All it does is put mom-and-pop stores out of business.

The Daily Show on "Too Big To Jail"

Posted by Bruce Schmiechen at 8/11/2013 No comments: Links to this post