Jared Bernstein, former chief economic aide to VP Joe Biden, comments on Congressman Paul Ryan's assertion that ”Our plan is to give seniors the power to deny business to inefficient providers...their plan [Affordable Care Act] is to give government the power to deny care to seniors”:

The ACA does nothing of the sort.  It was structured precisely to ensure that the fundamental guarantee of Medicare remained in place.   This link, from Austin Frakt, provides the details.  The punchline is that IPAB—the Independent Payment Advisory Board created by ACA to control cost growth—is explicitly not permitted to “…ration health care, raise costs to beneficiaries, restrict benefits, or modify eligibility criteria.”

So Ryan is wrong.  Full stop.

But there’s more.  Understanding this difference provides a useful insight into how health care reform under the ACA differs from Ryan’s approach.  ACA gets under the hood of the health care delivery system to attempt to control health-care cost growth.  Ryan simply shifts cost growth from the government to seniors.


Under (the Ryan/GOP budget) proposal, starting in 2022, the government would issue new Medicare beneficiaries a payment that they could use to purchase private insurance. These payments would increase in line with the consumer price index but not with faster-rising health costs. The slower increase in payments would generate large savings (and less risk) for the federal government; indeed, this would be the single most important driver of savings from the Ryan budget plan as a whole.

As the government paid relatively less for Medicare, beneficiaries would bear an increasing share of the cost of their care. It is no great accomplishment, however, merely to shift health expenditures from the federal government to consumers, without doing anything to decrease them in total.

The CBO’s analysis of the Ryan plan confirms that federal expenditures would be reduced, by a lot. By 2030, payments for a typical beneficiary would be more than 20 percent lower than current projections, according to the report, and the beneficiary’s personal costs would increase.

So far, nothing unexpected. On the critical metric of whether the Ryan plan would reduce total health-care costs, though, the CBO conclusion is shocking: The plan would not only fail to decrease health-care costs per beneficiary, it would increase them –- by an astonishingly large amount that grows over time. By 2030, health spending on the typical beneficiary would be more than 40 percent higher under the Ryan plan than under existing Medicare, according to the CBO report.

Medicare and the future of reality-based politics 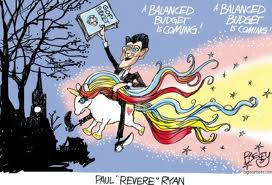 The Ryan fiscal plan was cruel, stupid, and counterproductive: you do not try to improve health care by destroying Medicare and adopting the RyanCare plan of turning insuring the elderly over to private insurance companies whose first act is to hire more administrators and pay them $250 billion a year to try to screen the Medicare patients who will be expensive to treat out of their policy pool. And the claim that eliminating Medicare and replacing it with RyanCare for the elderly was essentially the same thing as FEHBP (medical insurance) for members of congress is a lie of extraordinary magnitude and cynicism.

And we should not be worrying right now about the cost of Medicare in the 2020s and 2030s. Sufficient unto the day is the evil thereof. And the 9% unemployment of this day is indeed evil. Government right now should be focusing on creating jobs now, not on potential deficits a generation hence--especially as no congress can bind its successors.

But given that we are worrying about the 2020s and 2030s right now, it is a fact that there is a large long-run gap starting about a decade and growing between the 20%-plus of GDP that congress on its current institutional trajectory will tax and the missions that congress has promised the American people that the federal government will assume. And the political lesson of the past two years is now that you win elections by denouncing the other party's plans to control Medicare spending in the long run--whether those plans are smart like the Affordable Care Act or profoundly stupid like the replacement of Medicare by RyanCare for the aged--sitting back, and waiting for the voters to reward you.