The House GOP - just a few months into their "Winning-Duh!" triumphalism - has already reached the "I know they're lying because I saw them moving their lips" stage of epic political and policy failure 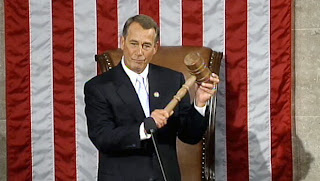 Two items on today's menu highlight the radical incoherence, profound dishonesty and - yes - "unseriousness" of the alleged conservatives in Congress who are using the country's economic and budgetary challenges as an excuse for ideological hyperventilation and rank hypocrisy, but little else.

Exhibit A - The New York Times reported that:


Mr. Obama wants to expand the power of the 15-member panel, which was created by the new health care law, to rein in Medicare costs.

But not only do Republicans and some Democrats oppose increasing the power of the board, they also want to eliminate it altogether. Opponents fear that the panel, known as the Independent Payment Advisory Board, would usurp Congressional spending power over one of the government’s most important and expensive social programs.


...the very same members of congress who voted this month to privatize Medicare in 2022 and enact draconian cuts throughout the 2020s and 2030s are here in town right now defending health care providers’ right to charge the government high prices for services that don’t work. Indeed, as recently as 2009 no less a figure than Paul Ryan himself was fuming at the idea of reducing government subsidies to for-profit insurance companies (via Medicare Advantage.)

Exhibit B, which is truly stunning in the annals even of congressional hypocrisy - Matt Miller's column at the Washington Post:


The House Republican budget adds $6 trillion to the debt in the next decade yet the GOP is balking at raising the debt limit...

I thought about making this week’s column that one sentence printed over and over 30 times. It would have been the opinion page equivalent of a Dada-esque protest against the inanity of the debate — and a cry for every news outlet to focus on this simple, clarifying fact...

For the life of me I don’t understand why the press doesn’t shove this fact in front of every Republican who says the debt limit cannot be raised unless serious new spending cuts are put in place. The supposedly “courageous,” “visionary” Paul Ryan plan — which already contains everything Republicans can think of in terms of these spending cuts — would add more debt than we’ve ever seen over a 10-year period in American history. Yet Ryan and other House GOP leaders continue to make outrageous statements to the contrary.

If I were Barack Obama, my mantra on this week’s debt tour and in the months ahead would be that we should lift the debt limit only by as much debt as is needed to accommodate Paul Ryan’s budget. The president and his team should say this every time they’re asked about the debt limit until people can’t stand hearing it any more.

Matt Miller's piece via Economist's View and Stan Collender
Posted by Bruce Schmiechen at 4/21/2011 No comments: