More Congressional Republicans voted to pass Medicare than voted against it

Here's an interesting bit of historical trivia in the context of our current political discourse. Although Ronald Reagan - in his role as General Electric toastmaster - famously attacked Medicare as a scheme to "socialize medicine," Republicans were not uniformly against a government-sponsored insurance plan to cover seniors.

Reagan's words sound crazy today, warning that if a Medicare bill passed, "you and I are going to spend our sunset years telling our children and our children's children what it once was like in America when men were free."  Yeah - totally nuts and even Paul Ryan is smart enough not to go there.

But in 1965 when Medicare was actually passed, more House Republicans voted for it than against it. 70 voted yea, while 68 voted nay.  In the Senate the GOP split went in the other direction - 13 yea, 17 nay - but the divide was still close enough to indicate the bi-partisan nature of the bill's passage.

In contrast, with Medicare currently the most cost-effective segment of our admittedly problematic health insurance and delivery system, today's Republicans pushing a scheme to destroy the most efficient piece of the health insurance puzzle signifies the party as a unified front of right-wing extremism with a "cost-effectiveness be damned" privatization obsession - hardly "conservative."
Posted by Bruce Schmiechen at 5/27/2011 No comments:

Email ThisBlogThis!Share to TwitterShare to FacebookShare to Pinterest
Labels: Conservatism in crisis

A weak economy staggers along - but is anyone in Washington paying attention?

As the recovery falters and appalling unemployment numbers remain with us, politicians of both parties seem to be focused on some version of debate over the deficit and the long-term future of Medicare.  Defense of Medicare against nutty professor proposals to end it is critical, but it doesn't speak to the crisis at hand.

This political logjam is an indication of just how lacking in seriousness and skewed to the socially nihilistic Right (personified by Ayn Rand fan Paul Ryan) our political discourse has become in a time of real crisis on the jobs front. No one in Washington seems to care about the central issue of getting economic growth on track and putting Americans back to work. David Leonhardt, business and economics writer for the New York Times, sounds the alarm: 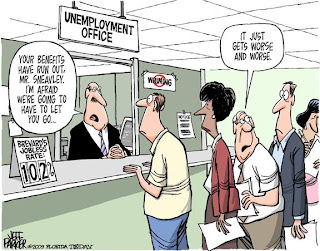 The latest economic numbers have not been good. Jobless claims rose last week, the Labor Department said on Thursday…Perhaps the most worrisome number was the one Macroeconomic Advisers released on Wednesday. That firm tries to estimate the growth rate of the current quarter in real time, and it now says annualized second-quarter growth is running at only 2.8 percent, up from 1.8 percent in the first quarter. Not so long ago, the firm’s economists thought second-quarter growth would be almost 4 percent.

An economy that is growing this slowly will not add jobs quickly. For the next couple of months, employment growth could slow from about 230,000 recently to something like 150,000 jobs a month, only slightly faster than normal population growth. That is certainly not fast enough to make a big dent in the still huge number of unemployed people.