Visit msnbc.com for breaking news, world news, and news about the economy
I'll have commentary on this tomorrow.

Update: For starters, check out Paul Krugman's reaction. Since Krugman tends to play Cassandra when it comes to President Obama's economic agenda and messaging, his relative optimism is heartening - HERE.
Posted by Bruce Schmiechen at 4/13/2011 No comments:

Noting the "great expectations" for faster economic growth this year, Catherine Rampell at the New York Times' "Economix" has this disturbing report:


When 2011 began, Macroeconomic Advisers, a forecasting company, expected that America’s economic output would shape up to rise at a 4.1 percent annual rate in the first quarter, the highest pace in over a year. 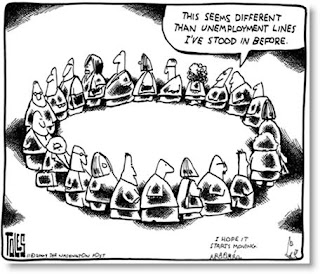 But economic reports coming in over the last few months have been increasingly disappointing.

Today, after an especially weak report on February’s trade deficit, the group’s economists lowered their first quarter G.D.P. estimate to a sorry 1.5 percent annualized. If borne out, that rate would be slower than each of the last two quarters, at a time when the economy desperately needs to be rocketing forward so that companies will hasten their hiring.

The Commerce Department will release its preliminary number for first quarter G.D.P. on April 28.

Update: MarketWatch (via CalculatedRisk) reports that forecasters at Morgan Stanley and RBS Securities have also lowered their G.D.P. estimates for the first quarter.

This bad news comes as little other than the scale of proposed spending cuts is being debated as our "serious" path to getting the economy back on track - as a "path to prosperity" even.  One of the NYT's online commenters, Chris Guan, in responding to this "Economix" news, offered strong evidence that allowing our economic agenda to shift radically toward austerity or focusing on the scale of cuts rather than growth, jobs and effective stimulus  - with Democrats appearing to tail after Republicans who are framing the debate - is precisely the wrong direction to move if we're serious about recovery.

Aggressive austerity and spending cuts have been imposed by David Cameron's government in the UK and appear to be dragging the country even further down into recession. According to an article in Bloomberg that Guan links,  "UK retail sales plunged most on record in March."

In the real world the Conservative government's austerity program is making matters worse not better, as one might expect if you're not reliant on "faith-based" economic notions that somehow consumer confidence and greater demand will arise magically in the midst of a program of cutbacks by the government overlaying depressed demand by households: