There is no issue where educated ignorance is on more perfect display than Post columnists, and Fox News All-Star panelists. They numbered among the select conservative intellectuals chosen to dine with newly elected president Barack Obama in 2009. 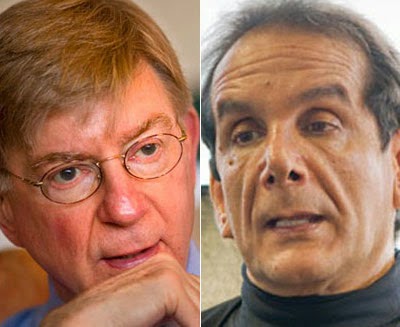 watching the conservative movement confront scientific evidence of climate change. Educated ignorance is not the same thing as the regular kind of ignorance. It takes real talent to master. George F. Will and Charles Krauthammer are two of the intellectual giants of the right, former winners of the Bradley Foundation’s $250,000 annual prize, Washington

On their Fox News All-Star Panel appearance this week, both men discussed the U.S. National Climate Assessment, which they dismissed with various irritable mental gestures. Their evasions and misstatements, clothed in faux-erudition, offer a useful entrance point to study the current state of the right-wing mind.

Krugman @ NYT on the shame - or should I say "shamelessness" - of too many in his profession:

The 2008 crisis and its aftermath have been a testing time for economists — and the tests have been moral as well as intellectual. After all, economists made very different predictions about the effects of the various policy responses to the crisis; inevitably, some of those predictions would prove deeply wrong. So how would those who were wrong react?

The results have not been encouraging.

Brad DeLong reads Allan Meltzer in the Wall Street Journal, issuing dire warnings about the inflation to come. Newcomers to this debate may not be fully aware of the history here, so let’s recap. Meltzer began banging the inflation drum five full years ago, predicting that the Fed’s expansion of its balance sheet would cause runaway price increases; meanwhile, some of us pointed both to the theory of the liquidity trap and Japan’s experience to say that this was not going to happen. The actual track record to date: 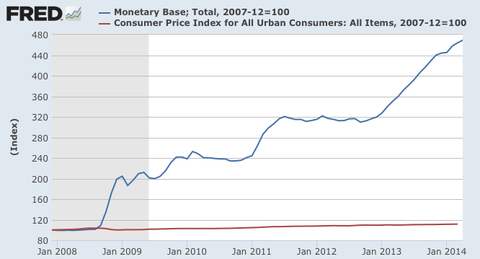 Tests in economics don’t get more decisive; this is where you’re supposed to say, “OK, I was wrong, and here’s why”.

Not a chance. And the thing is, Meltzer isn’t alone. Can you think of any prominent figure on that side of the debate who has been willing to modify his beliefs in the face of overwhelming evidence?

Now, you may say that it’s always like this — but it isn’t. Consider the somewhat similar debate in the 1970s over the “accelerationist” hypothesis on inflation — the claim by Friedman and Phelps that any sustained increase in inflation would cause the unemployment-inflation relationship to worsen, so that there was no long-run tradeoff. The emergence of stagflation appeared to vindicate that hypothesis — and the great majority of Keynesians accepted that conclusion, modifying their models accordingly.

So this time is different — and these people are different. And I think we need to try to understand why. Were the freshwater guys always just pretending to do something like science, when it was always politics? Is there simply too much money and too much vested interest behind their point of view?

Posted by Bruce Schmiechen at 5/11/2014 No comments: Links to this post