"Medicare spending isn't out of control"

While there is agreement among economists and health care experts that overall the US has highly inflationary health care expenses over the long term - certainly compared to other relatively wealthy countries with high-quality medical care and much better health outcomes - Uwe E. Reinhardt @ New York Times Economix shows, once again, that the locus of this "out of control" spending isn't Medicare:

It’s the season of holiday cocktail parties, demanding intelligent chit-chat over Chardonnay. In such data-free environments it is always safe to say, “Medicare spending is out of control!” Wise heads will nod, because it is a credo with wide currency.

After all, as I explained in my previous post, traditional Medicare, which still attracts about 75 percent of all Medicare beneficiaries, affords its enrollees free choice of providers and therapy. In the jargon of health-policy wonks, it is “unmanaged.” Thus, it would not be surprising if unmanaged Medicare spending were, indeed, out of control.

But some caution is in order. A really wise guy in the crowd, one familiar with relevant data, might challenge you with: “Oh, really? In what sense is Medicare spending out of control?”

That query might have been prompted by the following data. 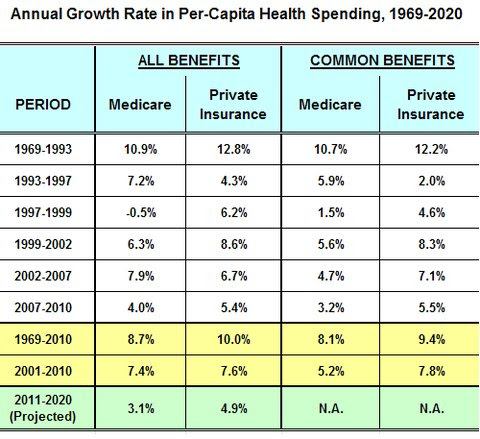 These data, most of which have been published by the Office of the Actuary, Centers of Medicare and Medicaid Services, of the Department of Health and Human Services (see Table 16), show that in most periods Medicare spending per Medicare beneficiary has risen more slowly than per-capita spending under private health insurance.

The exceptions are the period 1993-97, when private managed-care plans appeared to be able to hold down their outlays on health care better than did Medicare, and 2002-7, because there was a jump in spending as Medicare began, in 2006, to cover prescription drugs under the Medicare Prescription Drug, Improvement and Modernization Act of 2003.

So anyone claiming that “Medicare spending is out of control” can fairly be asked to explain on what data that assertion is based. The responses might be interesting.

Two objections might be raised to my interpretation of the data.