"No!" to Chained CPI cut to Social Security benefits


At the end of last year, just shy of the 11th hour in the fiscal cliff negotiations, President Obama made an offer that included a Republican-backed idea to cut spending by lowering the cost-of-living adjustment for Social Security benefits. The move shocked Congressional Democrats and dismayed Mr. Obama’s liberal base. 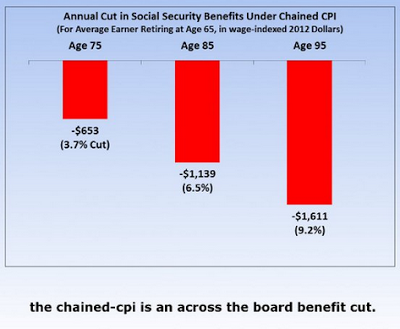 But that is not the end of the story. As the next round of deficit reduction talks gets under way, the administration seems determined to include the COLA cut in any new package of spending reductions. Rather than using the issue as a bargaining ploy, the administration appears to have embraced it as a worthy end in itself.

That is not to say that Social Security should be off the table. There are reforms that are eminently sensible, if only the political will could be found to enact them. But reducing the COLA is not a sound idea now and may never be.

At issue is the way inflation is calculated. The administration’s offer in the fiscal cliff talks — and the approach long advocated by Republicans — calls for using a new measure of inflation, called the “chained” Consumer Price Index, to calculate the COLA.

1) Raising the debt ceiling does not authorize one single penny in additional public spending.