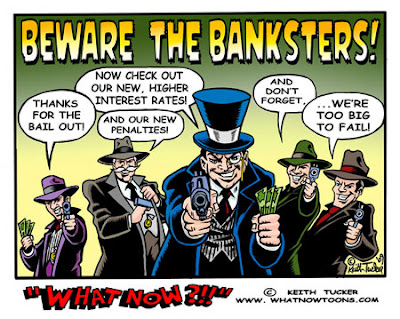 Amir Bihde, a professor at Tuft's Fletcher School of Law and Diplomacy, argues for "Boring Banks", HERE.
Posted by Bruce Schmiechen at 1/04/2012 No comments: Links to this post

Mitt Romney and the rest of the GOP pack routinely attack Obama's "socialism." Calling President Obama a "socialist" is crazy talk, but it's just as crazy to suggest that the European countries that have enacted a social democratic - though hardly "socialist" - framework for their dynamic, advanced capitalist economies to function efficiently aren't doing a better job of rewarding merit and hard work than ours is. One central reason our economy is increasingly dysfunctional is because characters like Willard "Mitt" Romney, representing a financial elite who feel  "entitled" to power, have had their way.


“Over the past three years, Barack Obama has been replacing our merit-based society with an Entitlement Society,” Mitt Romney wrote in USA Today last month. The coming election, Romney told Wall Street Journal editors last month, will be “a very simple choice” between Obama’s “European social democratic” vision and “a merit-based opportunity society — an American-style society — where people earn their rewards based on their education, their work, their willingness to take risks and their dreams.”

Romney’s assertions are the centerpiece of his, and his party’s, critique not just of Obama but of American liberalism generally. But they fail to explain how and why the American economy has declined the past few decades — in good part because they betray no awareness that Europe’s social democracies now fit the description of “merit-based opportunity societies” much more than ours does.