Taxes are lower than ever - so why are taxes "off the table" for Eric Cantor and his ideological confreres?

Paul Krugman has this regarding the tax side of any debt ceiling deal:


(Republicans) are willing to risk the good faith and credit of the federal government, rather than accept so much as a single penny of tax increases as part of a deal.

Given all that, it seems almost redundant to mention that federal tax receipts as a percentage of GDP are near a historic low: 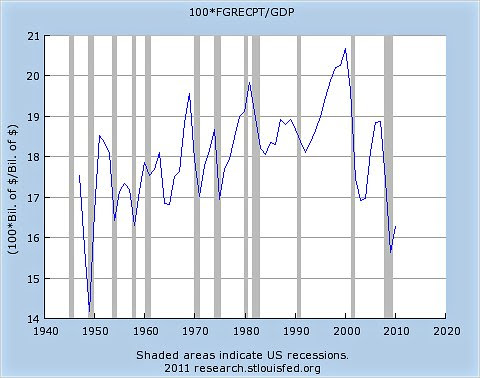 Federal receipts as % of GDP
So why are we seeing what appears to be childish behavior on the part of Eric Cantor and his fellow GOP legislators in the context of critical "negotiations" over the debt ceiling as they refuse any effort to increase revenues rather than just taking an axe to critical programs like Medicare and Social Security?  Krugman answers that burning question in our "quote of the day":

(T)he GOP never cared about the deficit — not a bit. It has always been nothing but a club with which to beat down opposition to an ideological goal, namely the dissolution of the welfare state. They’re not interested, at all, in a genuine deficit-reduction deal if it does not serve that goal.

Posted by Bruce Schmiechen at 6/25/2011 No comments: Links to this post