"The pirates behind the campaign to fix the debt" 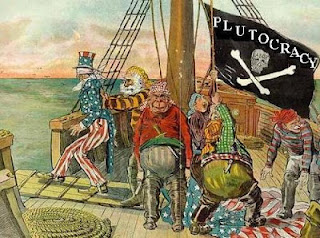 There are many more important topics out there than The Deficit, the scary, hairy monster that haunts the dreams of David Gregory and only the blood of the poor and elderly can appease its wrath. Climate change comes immediately to mind, as do income inequality, the vast inequities of our tax code, the ongoing upward translation of the nation's wealth, why more bankers aren't in federal prison, and whatever did I do to the baby Jeebus that he allowed Notre Dame to play for a national championship. But the biggest reason why we should shut the national piehole on the topic is not that we have more serious problems, or even that any discussion violates the blog's first rule of economics — Fk The Deficit. People Got No Jobs. People Got No Money.

The real reason we should stop talking about it for a while is that the people who are insisting that it will eat us and our posterity on toast are lying swine who would sell your white-haired granny to the Somali pirates for another three points on the Dow. Until we all acknowledge the fact that organized wealth in this country has become downright sociopathic in the heedless damage it does, any discussion of The Deficit can and will be hijacked by that quarter in order to gain absolution for its grievous sins and the right to go on committing them against the rest of us, over and over again.

Listening to these people talk about the national economy is like listening to a burglar tell you that you should really polish the silver more often.