The LA Times unpacks the "Mitt" Myth of Willard M. Romney as an entrepreneurial business man comitted to "job creation": 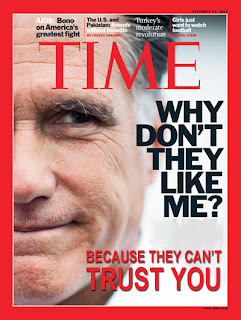 Shortly after Mitt Romney resigned from Bain Capital in 1999 to run the Olympics in Salt Lake City, potential investors received a prospectus touting the extraordinary profits earned by the private equity firm that Romney controlled for 15 years.

During that time, Boston-based Bain acquired more than 115 companies, according to the prospectus. Bain's estimated annual returns were more than five times that of the Dow Jones Industrial Average in the same period.

Now a front-runner for the Republican presidential nomination, Romney says his Bain experience shows he knows how to create jobs. He often cites Bain's investment in a little-known office supply store called Staples, which now employs more than 90,000 worldwide.

But a closer examination of the prospectus paints a different picture of Bain's operation. Under Romney's leadership, Bain became one of the nation's top leveraged-buyout firms, helping lead a trend in which companies were acquired using debt often pledged against their own assets or earnings.