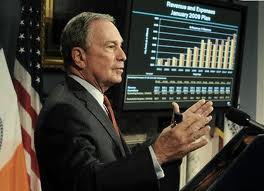 Mayor Michael Bloomberg said this morning that if there is anyone to blame for the mortgage crisis that led the collapse of the financial industry, it's not the "big banks," but congress.

Speaking at a business breakfast in midtown featuring Bloomberg and two former New York City mayors, Bloomberg was asked what he thought of the Occupy Wall Street protesters.

"I hear your complaints," Bloomberg said. "Some of them are totally unfounded. It was not the banks that created the mortgage crisis. It was, plain and simple, congress who forced everybody to go and give mortgages to people who were on the cusp. Now, I'm not saying I'm sure that was terrible policy, because a lot of those people who got homes still have them and they wouldn't have gotten them without that."


To me, this is Michael Bloomberg’s Marie Antoinette moment, his own personal "Let Them Eat Cake" line...Bloomberg, with this preposterous schlock about congress forcing banks to lend to poor people, may yet make himself the face of the 1%’s rank intellectual corruption.

"Inequality trends in one picture"


Here, from the CBO report, are the changes, in percentage points, of the shares of income going to three groups. The top quintile excluding the top 1 percent – which is basically the abode of the well-educated who aren’t among the very lucky few – has only kept pace with the overall growth in incomes. Just about all of the redistribution has taken place from the bottom 80 to the top 1 (and we know that most of that has actually gone to the top 0.1). 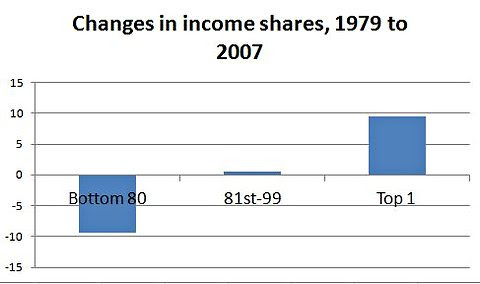 
Rising income inequality, like climate change, is an ideologically inconvenient issue for conservatives. They would prefer not to discuss it altogether. If forced to discuss it, they will generally either deny its existence or simply carry on as if it doesn’t exist.

The underlying facts, like the facts of climate change, are stark. Over the last few decades, income growth for most Americans has slowed to a crawl, while income for the very rich has exploded. That’s a reversal of the three decades following World War II, when all income groups got richer, with the poor and middle class rising at a faster rate than the rich. Crucially, the Congressional Budget Office’s new analysis shows that changes in government policy over this period have made inequality worse. (In CBO-speak: “The equalizing effect of transfers and taxes on household income was smaller in 2007 than it had been in 1979.”)

We’re not having a debate about how to reverse or even stop the growth of inequality. Nobody has a real plan to do that. The Democratic plan is to slightly arrest the growth of inequality by hiking taxes on the rich a few percentage points, so as to minimize the need to cut the social safety net. The Republican plan is to slash taxes for the rich and programs for the poor, thereby massively increasing inequality.

That is a hard position to defend in the context of exploding inequality, and conservatives would rather not defend it. Instead the right’s response has been to persistently deny or ignore the facts.

Paul Krugman on the implications of income inequality and "inequality denialism" among the right-wing punditry and policy class: 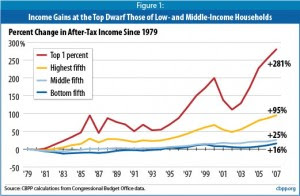 Whenever growing income disparities threaten to come into focus, a reliable set of defenders tries to bring back the blur. Think tanks put out reports claiming that inequality isn’t really rising, or that it doesn’t matter. Pundits try to put a more benign face on the phenomenon, claiming that it’s not really the wealthy few versus the rest, it’s the educated versus the less educated.

So what you need to know is that all of these claims are basically attempts to obscure the stark reality: We have a society in which money is increasingly concentrated in the hands of a few people, and in which that concentration of income and wealth threatens to make us a democracy in name only.