With a nod toward a nominal stock market rebound to what it hit 6 years ago (if you don't adjust for inflation) - from Economic Policy Institute we have a breakdown of who owns personal shares of the stock market and is benefiting from this "boom" : 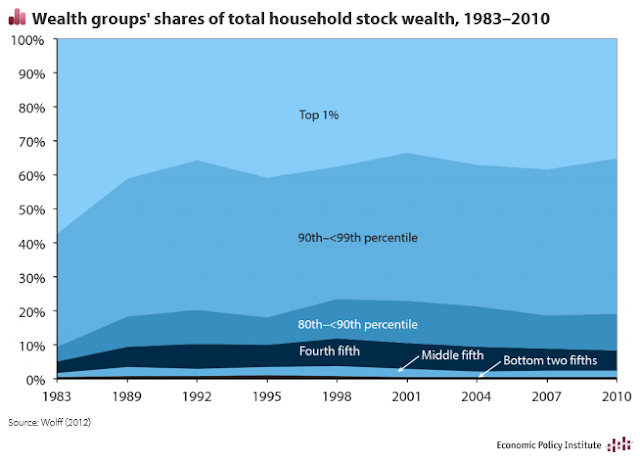 Posted by Bruce Schmiechen at 3/12/2013 No comments: Links to this post


Even as American corporations are raking in record profits, the largest among them are shifting larger amounts of money away from the United States and into offshore tax havens that allow them to pad their bottom lines even more, according to multiple analyses of legal filings made since the beginning of 2013. 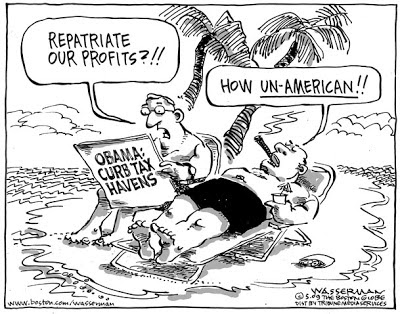 The Wall Street Journal found that the 60 largest companies moved $166 billion offshore in 2012, shielding 40 percent of their earnings from American taxes and costing the U.S. billions in lost revenue:


The amount of money at stake is significant, particularly when the U.S. budget deficit is high on the political agenda. Just 19 of the 60 companies in the Journal’s survey disclose the tax hit they could face if they brought the money back to their U.S. parent. Those companies say they might have to pay $98 billion in additional tax—more than the $85 billion in automatic-spending cuts triggered this month after the White House and Congress couldn’t agree on an alternative.

"We do not, repeat do not, face any kind of deficit crisis either now or for years to come"


People still talk as if the deficit were exploding, as if the United States budget were on an unsustainable path; in fact, the deficit is falling more rapidly than it has for generations, it is already down to sustainable levels, and it is too small given the state of the economy.


Start with the raw numbers. America’s budget deficit soared after the 2008 financial crisis and the recession that went with it, as revenue plunged and spending on unemployment benefits and other safety-net programs rose. And this rise in the deficit was a good thing!

Federal spending helped sustain the economy at a time when the private sector was in panicked retreat; arguably, the stabilizing role of a large government was the main reason the Great Recession didn’t turn into a full replay of the Great Depression.

But after peaking in 2009 at $1.4 trillion, the deficit began coming down. The Congressional Budget Office expects the deficit for fiscal 2013 (which began in October and is almost half over) to be $845 billion. That may still sound like a big number, but given the state of the economy it really isn’t.

Bear in mind that the budget doesn’t have to be balanced to put us on a fiscally sustainable path; all we need is a deficit small enough that debt grows more slowly than the economy. To take the classic example, America never did pay off the debt from World War II — in fact, our debt doubled in the 30 years that followed the war. But debt as a percentage of G.D.P. fell by three-quarters over the same period.